FIRST CONTACT: ‘THE BEST OF BOTH WORLDS’ SEASON 3 EPISODE 26 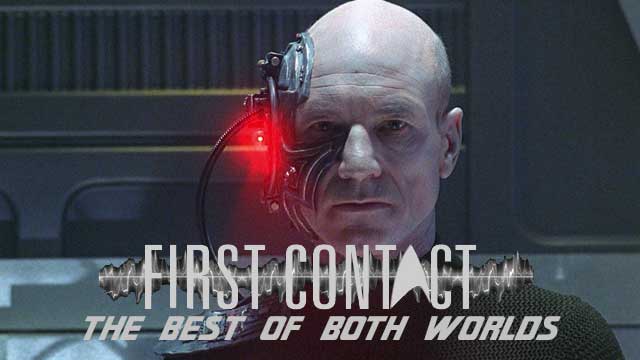 They’re back! After forgetting about them for a while, the Borg decide to improve Federation architecture by wiping it off the face of a planet. Borg specialist Lt commander Shelby boards the Enterprise to help the crew but ruffles Riker’s feathers with her abrasive and ambitious attitude. When the Enterprise encounters the Borg sphere, they appear to have a special interest in Picard who they then kidnap before heading for Earth at high warp. While the Federation fleet gathers at Wolf 359, the Enterprise pursues sending an away team onto the cube to retrieve Picard and slow it down.  They succeed in stopping the ship but Picard has been transformed into a Borg. With a new weapon designed to destroy the Borg, Riker has one shot to stop them before they head for Earth. He fires…

Andrew, James and Alex finally reach the season three finale of Star Trek: The Next Generation but does ‘The Best of Both Worlds’ deserve it’s reputation?

Geordi and Data head to the holodeck to play Sherlock Holmes and would you believe it, something goes wrong.

Data is transporting a dangerous chemical required to prevent an environmental disaster on the planet of the week, when his shuttle explodes, apparently killing him.