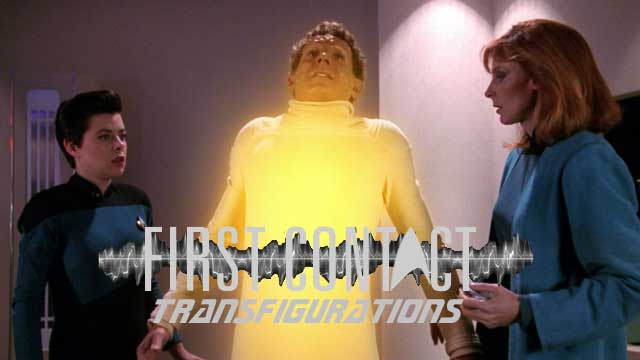 The Enterprise is exploring an uncharted system (they’re actually exploring guys!) when they find a lone survivor of an escape pod crash. Doctor Crusher stabilises him by hooking him up to Geordi’s brain and moving him to the Enterprise. The patient, which they call John Doe, heals remarkably quickly, going from near death to up and walking, even displaying healing powers, while the Enterprise scans some stars or something. However he has no memory of his past life. Using a module found on board the pod, Geordi and Data discover John’s planet of origin but as his people approach, John becomes panicked and tries to escape. The Zalkonians seem to be space Nazis and accuse John of being adisruptive influence on their society. Turns out, John is the next evolutionary mutation of his race, who turns into a star child or something.
Join Andrew, James and Alex as they embark on another space adventure in their Star Trek: The Next Generations podcast.
Listen to the previous episode, ‘Ménage à Troi’ here.

Wesley Crusher has been accepted into Starfleet Academy. Before he does, Picard decides to take Wesley on a mission where’s he’s mediating a mining dispute…

The Enterprise is diverted on a secret mission to pick up a special Emissary, K’Ehleyr, a half Klingon who has a history with Worf.