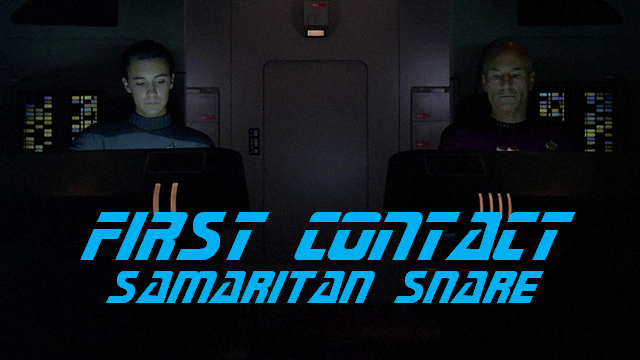 Wesley prepares to go to a Starbase to take some more Starfleet exams when he’s surprise to be joined by Picard, who needs to go get some maintenance on his artificial heart, and he doesn’t want anyone in the crew to know. Meanwhile on the Enterprise, Riker proves himself to be the most inept Captain in the world when he allows Geordi to be kidnapped by some idiots despite being warned by Troi that they’re bad guys. They save him with some clever chat then rush to the starbase to save Picard whose operation has gone badly and Pulaski is the only Doctor in the quadrant who can save him.  And she does.

Andrew, Alex and James all agreed that parts of ‘Samaritan Snare’ are excellent, it’s a shame those parts comprise less than 2 per cent of the total which leads to extended conversations about Picard’s reading material and Ensign Gomez’s hot chocolate consumption.

Listen to the previous episode, ‘Q Who?’ here

https://youtu.be/lavy7qZ1aoo The Orville season 2 trailer debuted at San Diego Comic Con ahead of the sophomore season which begins later this year on FOX. While many expected a show created by and starring Seth MacFarlane

Star Trek: The Next Generation’s take on feminism is a great success, provided you’re an idiot