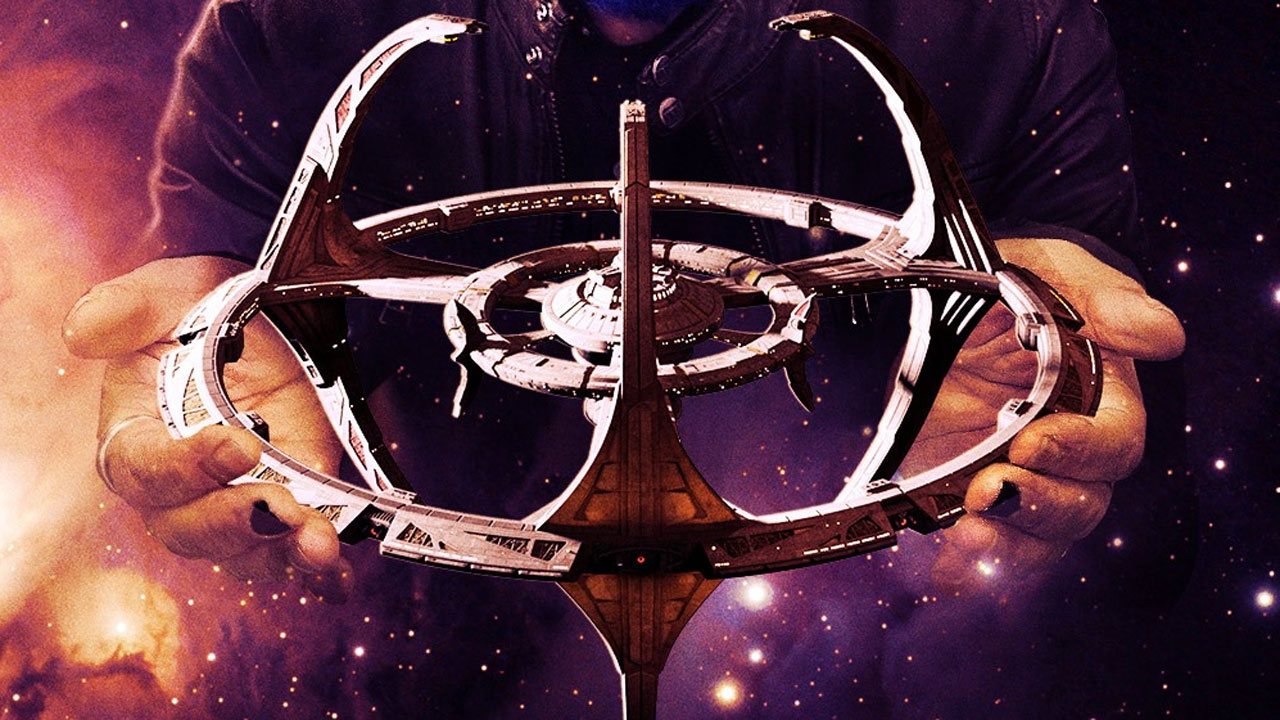 Deep Space Nine was always a divisive show.  It wasn’t boldly exploring space.  It was dark and moody compared Next Gen’s optimism and Voyager’s… well, whatever the fuck Voyager was.  And if you were on t’other side of the fence, it was just the poor man’s corporate polished version of Babylon 5.

For its defenders, though, it was the grown-up Star Trek – and not in a Discovery, f-bomb kind of way.  It was a show about human failures, about personality conflicts and the politics of war.  It wasn’t Gene’s Trek, but it was a show telling a grand, epic story that focused on people.

And it is a series  that has clearly benefited from the reappraisal afforded by the easy access of streaming and DVDs, of being able to appreciate its slow burn serialisation – meaning the long-gestated documentary by former showrunner Ira Steven Behr looking back at the show is perfectly timed.

Behr, who increasingly looks like a Jim Henson puppet version of Richard Schiff, acts as frontman and co-director for What We Left Behind, which pulls together many of the cast and crew of DS9’s seven series to discuss the highs, lows and legacy of making what gets unfairly criticised as Star Trek’s bastard child.

Going into the documentary, much of the hype was about the remastered HD footage and the ‘season eight writer’s room’, moments from which are liberally scattered throughout the show as the likes of Behr, Ron Moore, Robert Wolfe and co plot out the opening episode of a 25-years-on soft reboot.

The remastered footage, produced partly in response to the fact that CBS seems unlikely to give DS9 the same treatment as TNG or TOS in terms of shiny Blu-ray releases, does look great – especially when juxtaposed, occasionally within the same scene, with the original footage.  Much of the restoration work was overseen by DS9’s director of photography, who ensures a vibrancy and contrast missing in much of the flattened VHS transfers and does make viewers long for something we probably won’t ever get.

However, the real gems in the documentary are the bits that haven’t had as much headline-grabbing attention.

Cut through the documentary are scenes of the cast reading some of the hate mail the show received, something which clearly rankled a lot of them as actors, who resented how DS9 was never given a fair crack of the whip by the top brass at CBS.  The positive tone of the documentary means these scenes are largely played for laughs, which also means two clear sticking points are addressed but only in broad terms.

It’s clear from the interviews that having Worf parachuted onto the show at CBS’s insistence rankled pretty much everyone except Colm Meaney – not because of Michael Dorn, but because they saw it as them having been seen to be failing without that TNG stamp of approval.  Dorn for his part puts over DS9 as his best Trek work, but it also hints at the tensions between those making the show and those paying for it.

Likewise, the exit of Terry Farrell is dealt with briefly, but emotionally – a clearly angry and upset Farrell tells of being disrespected by the producers, claiming one told her she was lucky to have the show and should sign the offered new contract or end up back working in a department store, while a network representative insists Farrell was the one who wanted to quit.  But the impact is undercut by immediately cutting to Nicole DeBoer talking about taking over as Ezri and Rene Auberjonois saying while her departure was sad, it gave tired actors something new to work with after six years.

It highlights one of the few big stumbling blocks with What We Left Behind. The documentary is billed as a celebration of DS9 – and rightly so, since there’s a strong argument to be made that it represents the best, and most modern, of Trek in a way that Voyager, Enterprise or Discovery failed to.  We get constant affirmation of how much it represented a torch for various communities – from people of faith to the armed forces, from fans and crew alike who were clearly touched by its impact.

However, that need for celebration, and for a lightened mood, mean the rougher aspects of the show get skated over or around, hints dropped at the tough working conditions (20 hour working days, constant make-up sessions) or creative difficulties but which never get the exploration they deserve.  Working with finite resources, and a cast and crew who clearly get on famously, will always make these things hard to explore in a documentary and nobody wants a tabloid-style Bajor Confidential hatchet job.  But the threads left dangling are intriguing.

That said, the stuff DS9 got right it got really right, and that gets highlighted rightly in a section on the social justice issues the show pursued.  The serialised storytelling, particularly once the Klingons show up and we get hip deep in war, allowed for character development the likes of which hadn’t been done on Trek to that extent.  As one contributor says, “the least developed character on Deep Space Nine had a greater arc than anyone on TNG”.  Molly O’Brien might disagree, but their point isn’t wholly invalid.

The politics of war, terrorism and of more ambiguous characters in conflict was one of the key themes of the show’s later seasons – raising an interesting discussion between Behr and Nana Visitor over whether Kira, and thus DS9, could have worked in a post-9/11 world.  The desire to create a positive black male role model – and father figure – for viewers by Brooks, and the three year fight for him to be allowed to have the goatee and shaved head look that marked his style in Hawk but was seen as too ‘street’ for Trek by management, digs into the racial tensions in the USA when the show was airing.

Sadly the absence of Avery Brooks as a talking head is notable – he appears only in pre-existing footage from one of the Shatner docs, and clips of him at a convention – but his presence is felt throughout, and the respect the cast and crew have for him as an actor, director and a leader on set is clear and present.

Interestingly Behr self-flagellates about the show’s failure to be more LGBT positive – something that would have been just as controversial as the show’s colourblind focus – citing the Dax-centric gay episode as not enough and lamenting they didn’t properly out the show’s resident Uncle Monty in Space, Garak the tailor. While it has the air of saying ‘we have to say we didn’t get everything right’, his criticisms are also entirely legitimate and honest, and something that Trek would continue to struggle with right up to the 2010s.

And perhaps that’s the message overall from the documentary.  The show clearly carries much love among everyone who made it – even Brooks, despite his absence from the film – and a sense of almost defensive loyalty from those interviewed, which suggests a feeling of ‘we did a great job – but we could have done even more if given the right support’.

What We Left Behind definitely isn’t perfect, and allows itself a degree of self-overindulgence (two singing bits, the writers room stuff) that could have been cut for more insight.  But it’s also a fun, largely honest and genuine exploration of why the middle child of 90s Star Trek deserves a far better rap than it got.

Oh, and it’s worth sticking through the end credits for the Indiegogo backer names.  The payoff is perfect.

What We Left Behind arrives on digital media in August 2019.