Time travel is great isn’t it? You go back and have some fun and then return to your present without any lasting consequences. Well that might be true if you’re in some poorly written fan fiction but more often than not, you do something wrong and get back to find everything is completely screwy and you find yourself asking why you ever even bought that Sport’s Almanac in the first place. Since we seem to be inhabiting the worst possible version of 2016, let’s take a look to our favourite teacher – television, and the episodes that taught us that changing the past is something not done lightly.

Buffy the Vampire Slayer – The Wish 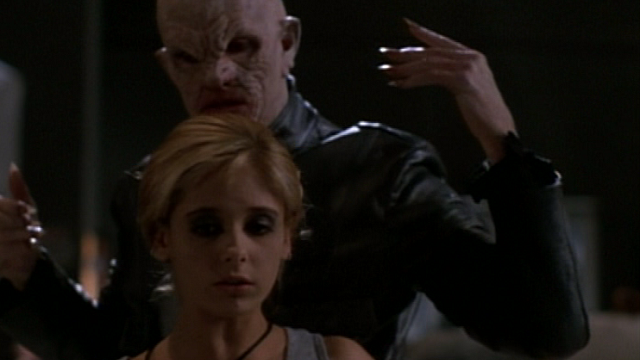 This one wasn’t caused by time travel but as the title suggests, a wish made by Cordelia Chase to vengeance demon Anyanka. What was that wish? That Buffy Summers never came to Sunnydale. In the new reality, she never met her friends and Watcher, and ended up defending the Hellmouth in Cleveland which basically meant that the world went to hell, with the Master ascending to Earth when the Slayer failed to stop him. This left to the Scooby Gang in very different positions – Buffy became more jaded and scarred, Willow and Xander died to become kinky vampires with Angel as their tortured pet while Giles continued to fight the good fight without a slayer and Oz was basically the same. This features a brutal ending with Xander killing Angel, Buffy killing Xander, Oz killing Willow and Buffy dying and the hands of the Master, just as was prophesied. Giles realises this world was caused by a wish and before he destroys the amulet that created this new timeline, Anyanka tries to stop the Watcher asking him why he thinks this will make it better. He replies: “I have to believe in a better world.” We can all take something from that. 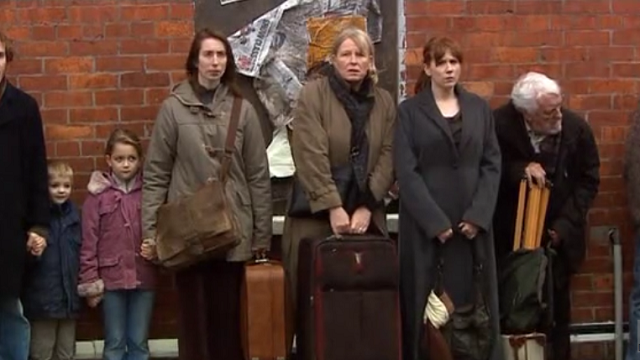 Russell T Davies never hid the fact that American genre shows like Buffy were a big influence on how he approached the new iteration of Doctor Who. That love was never worn on the sleeve of the show’s metaphorical jumper more than ‘Turn Left’, essentially a Whoniverse version of ‘The Wish;. Although that’s the inspiration, it surpasses that episode, utilising every event from the show’s new mythology to show how dark the world could be without the Doctor, as aliens invade, London gets destroyed by the starship Titanic, and friends of the Doctor, Sarah Jane Smith and Martha Jones meet their demise and even Captain Jack ends up on the wrong side of the universe. It’s bleak but it’s also an outstanding character study with Catherine Tate’s Donna transformed by events, becoming the every man witnessing humanity falling apart but still finding the strength to make a difference. 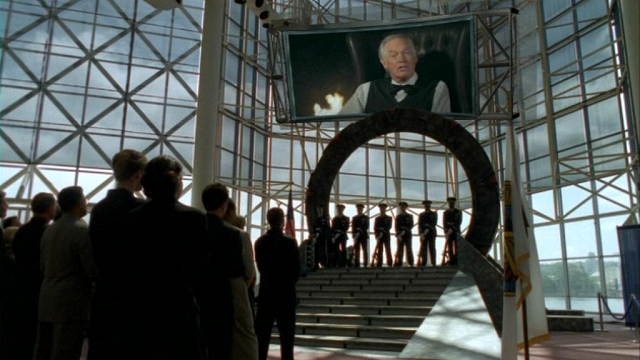 Stargate SG-1 probably doesn’t get the credit it deserves as being one of science-fiction’s most consistently entertaining shows. It also really knew how to handle time travel, with rules followed to their often dark conclusion. This episode (broadcast in 2001) begins in the alternate future of 2010 with the Stargate program now public and Earth apparently united, peaceful and free of disease through the help of the benevolent Aschen. These lovely aliens have shared their technology, bringing about a new advanced era on Earth, eradicating disease and even allowing Daniel Jackson to get new glasses. As it turns out, this utopia is more of a dystopia. The Aschen are in fact sterilising the general population, taking over the planet without firing a shot. The only way to fix things is for SG-1 to use the Stargate to send a message to the past? They succeed in the end but only after our leading characters are all horribly killed and not for the last time (see also Stargate Continuum). 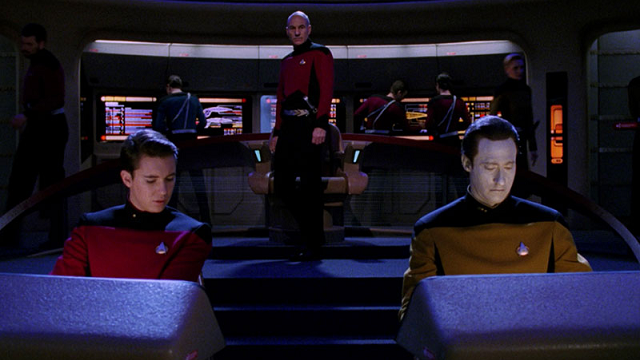 Perhaps the greatest episode of Star Trek: The Next Generation, ‘Yesterday’s Enterprise’ was an idea that really should have been saved up to be a movie. When Captain Picard’s Enterprise-D is out doing some exploration for once, another ship – the Enterprise-C emerges through a time hole from 19 years in the past and reality shifts around them. In this new reality, Worf and Troi are nowhere to be found and Tasha Yar is stillalives and serving tactical with the Federation are engaged a bloody war with the Klingons. When the C left, they were defending a Klingon base against the Romulans and Picard can either send them back to certain death or they can join the Federation fleet, which is close to collapse. But could sending the crew back, actually prevent the war? Well of course, and Guinan knows it because she’s magic. As well as being a bold alternate timeline episode, this show rights the wrongs of season one but actually giving Denise Crosby’s Yar something to do, as well as providing her a meaningful death this time around. More importantly, the Enterprise would get a far better lighting scheme which would clearly go on to influence the design on Star Trek: Voyager. 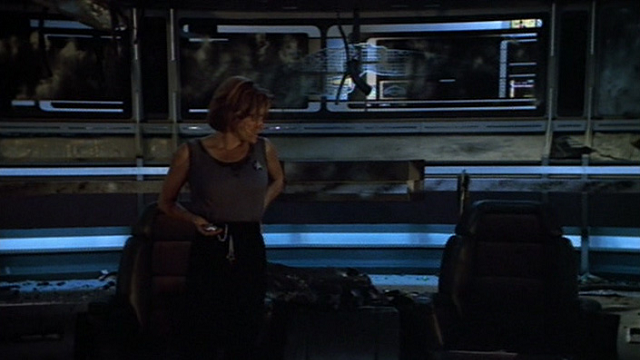 Showing a whole year of terrible things happening the the crew of the USS Voyager is a great idea. A Starfleet crew stranded alone in a distant area of space, surrounded by potential hostile aliens and more anomalies than you can shake a stick at, should probably feel some consequences. This could also be a great opportunity to shake things up in terms of the cast by killing off some of the dead weight. Sadly, this wasn’t how this iteration of Star Trek worked and everything including Tuvok’s blindness, the deaths of countless crew members, and ultimately the destruction of Voyager itself are all erased when the big reset button is pushed at the end of the two-parter. That said, the idea of using time as a weapon and changing the past to your advantage is an refreshing take on the concept and, if only for a couple of episodes, it was interesting to see the version of the show many wished it could be. 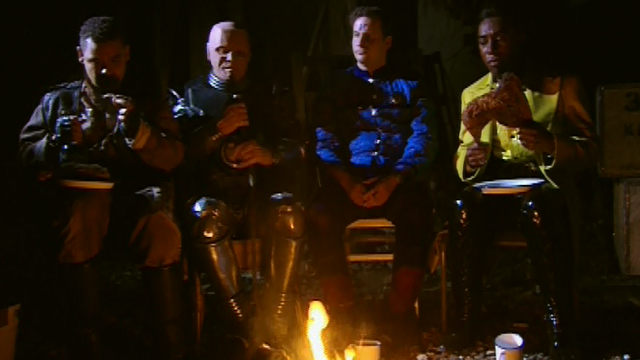 Long before James Franco tried to stop Lee Harvey Oswald’s assassination attempts, the crew of Starbug took an accidental trip back to Dallas 1963 and knocked the gunman out of the window. This saved the life of JFK but destroyed his legacy in the process. In this timeline Kennedy was impeached due to him sharing a mistress with a Mafia boss, allowing them to put their own candidate in charge and accelerating the Cold War with the USSR building a nuclear base on Cuba. This put an end to America’s involvement with the space race, leaving the crew without a future. Their only hope is to find a second gunman…who better than a disgraced president on his way to jail? While this timeline may not have consequences for the regular characters, it’s a thoughtful look at how a single event can change the perception on an individual and how an individual can impact the whole world. It also raises the important question of the ethics of eating corpses. 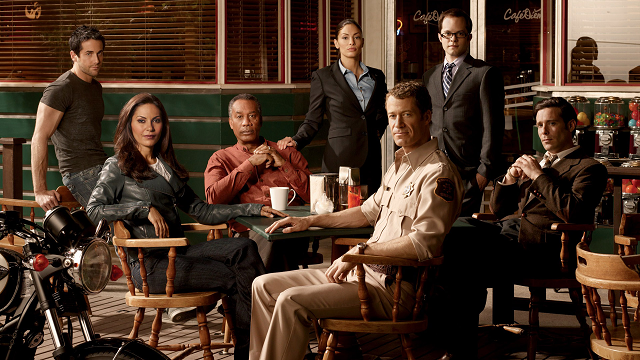 Eureka may have ultimately been pretty light and ultimately forgettable but it wasn’t afraid to go in for some long form storytelling. Following a time travel trip to the 1940s and the town’s origins, five of our regular characters return to a world that’s not quite the same. Jo finds she’s no longer dating Zane; Henry finds himself married to a woman he doesn’t know; Allison finds herself demoted; Jack discovers his ex girlfriend is no longer his ex; and Fargo is director of Global Dynamics. And the writers they were brave enough not to reset it all at the end. Well this doesn’t sound like a dark timeline you say but imagine going home and finding it isn’t quite home and the people you love don’t remember things the same way you do. Isn’t that the saddest timeline of all?

It’s the full trailer for Doctor Who series 8

Is the Doctor repenting for his sins?

The new Doctor Who companion is…

Peter Capaldi has now occupied the TARDIS for two seasons but while he’s redecorated, he’s been travelling with Jenna Coleman’s Clara, who still somehow felt like she worked far better in Matt Smith’s era.