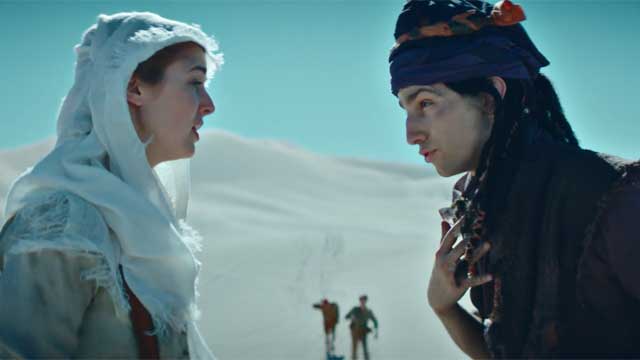 Catherine, James and Wasif arrive on an alien world and fight off a scantily-clad yet powerful alien with unconvincing yellow eyes. Impressed by their fight, the Goa’uld Aset wonders if she can use the humans to protect her Harcesis child. Our heroes are helped by a young man named Kasuf who escorts them to a village where they are tied up for some reason. In the struggle to escape, Wasif is stabbed but is healed by a mysterious object. Meanwhile, the Nazis and Professor Langford are locked up in a cell and don’t do anything of note.

Isn’t it strange that they made 10 minute episodes but they keep releasing more than one at a time?At this rate they’ll be done in a couple of weeks. That might not be a bad thing. The first of these two double bills possibly exemplifies the worst of what this show has to offer.

It feels like the old Doctor Who with people just standing in a not very good set and talking. Unfortunately the dialogue isn’t really worth your patience. It usually starts fine but ends up with unmotivated squabbling and shouting at each other. They’ve just arrived on an alien planet, something that was impossible just 10 minutes earlier, but there’s no sense of awe or wonder. Sure, it’s a situation filled with peril,  but if you’re taking us on a journey, the people going on it need to want to be there or at least be excited by the possibilities. That way, the audience can invest more and feel like they’re being taken on a ride.

The fight sequence between the underling Goa’uld following their arrival isn’t exactly inspired choreography but it gets the job done. However, the really skimpy costume just looks really cheap and nasty. And the yellow contact lens look they’ve done with for the Goa’uld remains pretty horrible. But hey, the budget is what it is.

Talking of the Goa’uld, the revelation of a Harcesis seems like a pretty big deal. It’s a detail that needs some explanation though, because this is some deep mythology from a TV show from 15 years ago. We’ll probably get there and I suppose this is a show that’s for the fans but it should be able to stand up on its own. It’s also such a big idea, it doesn’t seem like this show will be able to address it within its remaining 50 minute running time. Perhaps there will be a cliffhanger but that sounds like a terrible idea.

The second episode opens things out a bit and it’s wonderful to see some real location filming in the desert. It broadens the visual scope of the show and there are some nice transitions too. The colour timing to make it look more alien but doesn’t really enhance things. Using the character of Kasuf is extraordinarily fannish but seems like a natural thing and establishes this as the same planet from the first film. He’s friendly and helpful but ultimately his actions don’t really make sense. I don’t know why our characters end up tied to a post, or abandoned, or what that thing is that steals them. When no one’s motivations are understood, it’s hard to care about the characters. It’ll all be explained in coming weeks…maybe.

The Nazi characters remain the weakest link in the show, especially the horrendous cut back to Earth with the comic relief. Tonally, it’s horribly jarring. Also, it has some of the worst ADR dubbing ever seen in a professional production. Even the straight Nazis are played far too broad and pompous. It means we neither find them scary and dangerous nor are they actually funny. Connor Trinneer is pretty much just left in the corner, doing the best acting in the show and trying to look dignified.

I hate to bang on about it, but the Stargate effect is woeful. They really linger on it in episode four. It looks almost pixelated (I appreciate that could be the streaming.) It would have been nice just to get that one shot right but, the restrictions of this show are very much on display. If the rest of it was better, little things like effects and costumes wouldn’t matter.

Rings make their first appearance in Stargate Origins. These ship to surface transportation devices are better than a shuttle but not quite as good as a teleporter. They basically work like a mini Stargate, requiring two terminals and a straight line to move people or things around. They were first seen in the original Stargate movie.

Kasuf makes an appearance as the young man who helps our intrepid band of heroes to the the village. Kasuf was the leader of the people of Abydos in the original Stargate film. He became a recurring character on Stargate SG-1 and was played by Erick Avari in both iterations. He is the father of Skaara and Sha’re, the latter of which became the wife of Daniel Jackson His presence would seem to confirm that this is the planet Abydos, the setting of the Stargate film.

Ra, the sun god and system lord gets a name check by the Goa’uld seen within this episode, which would also seem to confirm this as the planet Abydos. In the original film, Abydos was in another galaxy but SG-1 retconned that to be the closest planet in the Stargate system to Earth, and that was the only one that could be opened before the computer system made the adjustment for galactic drift.

There’s a Harcesis child. This is the human offspring of two Goa’uld hosts and contains the entire genetic memory of the species. They are forbidden by the Goa’uld as they could be used as a weapon against them. This is a fairly deep piece of the Stargate TV mythology. SG-1 once found the child of Apophis and Amaunet, Shifu, but his knowledge was too dangerous for humans and he was protected by ascended ancient Oma Desala.

The seventh symbol was a problem for Daniel Jackson in the original Stargate film, too. This represents the point of origin and is different on every gate. Presumably Catherine will have forgotten all of this by the time she tries to open the gate again in the 1990s.

A new trailer and details have been released at San Diego Comic Con for Stargate: Origins, a prequel web series set in the Stargate universe.

The first three instalments of Stargate Origins dropped on Friday 15th of February. You can read our spoiler-filled thoughts below. First, it might be useful to see where the Stargate franchise stands.

There’s something beautifully comforting about seeing the Stargate open and a wormhole forming. This new trailer confirms that the gate really is reopening rather than just a story being told around it.