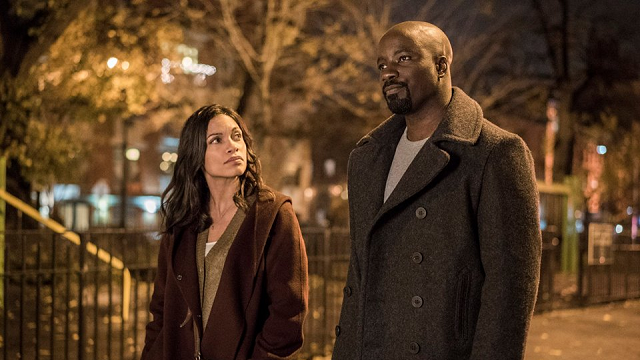 How do you tell an exciting story about a superhero who’s unbeatable? Finding and exploiting a vulnerability in an invulnerable hero is a challenge that’s plagued comics and script writers since the genre began, from Superman onwards.

And Luke Cage is no different, as Marvel’s reluctant Power Man finds himself dragged into an increasingly personal gang war that threatens to consume not just his adopted home of Harlem but his loved ones.

Anticipation for the next phase of Marvel’s unfolding Defenders franchise has been high ever since we got our first glimpse of Luke Cage, serving drinks to angry goth cotton bud Jessica Jones. Now he’s moved across New York City to his comic book home of Harlem, with the spotlight now firmly placed on one of Marvel’s most popular characters in a time and landscape of Black Lives Matter, police attitudes to race and the gentrification of long-established communities.

But although Luke Cage is intrinsically tied into Netflix’s little corner of the wildly inaccurately named Marvel Cinematic Universe, it’s also, weirdly, a semi-sequel to Iron Man 2, both thematically in what it represents within the build to a bigger picture, and in terms of plot, with the work of disgraced arms developer and Stark Industry rival Justin Hammer being crucial to the story.

Like Iron Man 2, the story also features a mistake from the main character’s past coming back to try and disgrace, and ultimately destroy, our hero. And like Iron Man 2, it feels like there’s a deliberate move to start properly positioning the pieces on the board for next year’s The Defenders mini-series — the Netflix down-and-dirty counterpart to the Avengers.

The show has far closer ties to The Avengers than Daredevil or Jessica Jones, which while reflecting the damage done to New York by the Chitauri invasion, were focused on telling their own stories. While Luke Cage does the same, the fallout from The Avengers overlaps with the story much more. Ironically though, it overlooks the obvious comparison — that the last time two indestructible, super strong types fought in the streets of Harlem, it was the Hulk and the Abomination wrecking the joint.

Mind you, Harlem’s as much an important part of Luke Cage’s story as Hell’s Kitchen is with the adventures of Jessica Jones and especially Matt Murdoch – in fact, arguably more important. As with those shows, this is a depiction of the community as a mix of reality and perception. In reality like Hell’s Kitchen, like Harlem, has undergone significant gentrification and a change of population demographics.

To fit the comics adaptations, the version we see here filters some of that through the 70s view of the district, although the gentrification is acknowledged here, with Alfre Woodard’s corrupt politician Mariah Dillard looking to simultaneously capitalise on the property boom and the fear that Harlem risks losing its black identity. 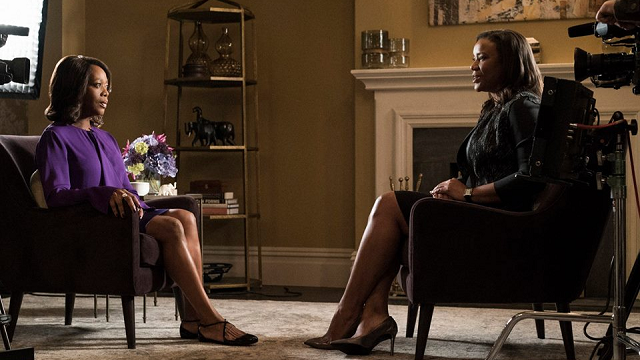 But that drawing on Harlem’s identity and culture means the show is intrinsically tied into the culture of the neighbourhood, with cameos from the likes of iconic tailor Dapper Dan and a host of popular black musicians performing at Harlem’s Paradise as part of an intricate and evocative, largely diegetic soundtrack.

It makes the district feel a living, breathing part of the story, and gives the stakes Luke Cage is fighting for a real sense of import — he’s at home in Harlem, as much as he is anywhere, and feels a burden and a duty to protect it. The battle for hearts and minds in the community — between Cottonmouth’s criminal empire building, Mariah’s political manoeuvring, the police’s attempts to maintain order and Luke’s own brand of stoic, community led vigilantism, is a key theme here — a battle for the soul of the community that very much reflects, with increasing timeliness, on the troubles in various communities in America today.

Now, cards on the table, I’m very much the wrong person to be writing or reviewing the accuracy and validity of the issues being presented in Luke Cage, being a white, middle class, 30-something Glaswegian with a Britpop fixation. Far better and more learned writers have reflected on the black community messages within Luke Cage’s 13 episodes, and I’d recommend reading them for the kind of insight the show deserved.

Instead, let’s look at the show itself. And start with flaws — because there are some in what is otherwise a genuinely entertaining and likeable slice of the MCU.

Perhaps the most notable is the direction which, while entirely perfunctory, feels very flat after the first couple of episodes — which are notably helmed by Paul McGuigan, the director of Lucky Number Slevin and the man who set the visual style for Sherlock. His playing with focus and light in the first two episodes provide a lovely series of visual cues that are lost in the rest of the show. None of the remaining episodes are particularly bad — but they do feel much flatter than the scene setting first two instalments.

There’s also the dialogue, which feels at times like it’s written for the speech bubbles of a comic book rather than the mouths of actors, particularly in a story that relies on at least one significant soliloquy or monologue per episode. That said, showrunner Cheo Hodari Coker and his writers acknowledge this with tongue in cheek, as Luke’s more cliched utterances get rebuked for being corny by Claire and Misty.

Balancing that, of course, is the performances, which are uniformly brilliant. Mike Colter threatened to steal the show in his Jessica Jones appearances — and put front and centre here he presents Luke as a quiet, stoic and reluctant hero. He’s a hugely charismatic performer who, despite the size and power of the character, delivers a contained turn.

MCU bridging performer Rosario Dawson gets more to do here than she did in Daredevil season two or Jessica Jones, and becomes a key part of both Luke’s life and the story. The evolution of the character — from reluctant assistant to proactive supporter, draws out a more energetic and excited part of Dawson’s performance — a nice contrast to Colter. And Simone Missick’s turn as Misty Knight is perfect, with a bubbling undercurrent of rage beneath her cool exterior. In the same way that Colter threatened to steal Jessica Jones, Missick does the same in Luke Cage. 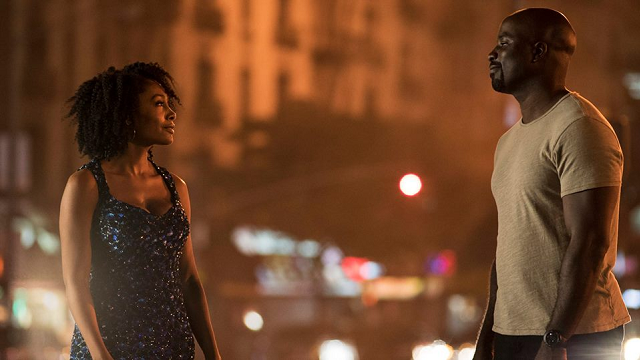 The always reliable Alfre Woodard as duplicitous comics villain Black Mariah – effectively the show’s counterpoint to Wilson Fisk, is as excellent as you’d expect. The other two key villains – Erik LaRay Harvey as Diamondback, and Mahershala Ali’s take on Cottonmouth – are both far broader performances but while Harvey’s is at times panto villainy, Ali’s turn is fascinating — at times he seems to be giving a far bigger performance than necessary but as the story unfolds the reasoning behind it becomes clear — we see what made Cornell Stokes what he became, and suddenly the artifice and showy nature makes sense.

And those performances give live to the story, which is by and large straightforward, mixing a Wire-esque police v gangs procedural with an exploration of the origins of Luke Cage and an updated background of his former life as Carl Lucas. It’s one that also finds creative ways to answering that question of how you defeat a man who’s bullet-proof, both physically and culturally — setting Luke Cage up as both hero and anti-hero, fugitive and fighting force.

Wu Tang Clan’s Method Man raps what amounts to a 2016 manifesto for why Luke Cage as a show and a character works during one episode, something no other part of the MCU could get away with yet which feels perfect here.

There’s some nice nods to both the Netflix universe – Fisk and Castle’s recent impact in Hell’s Kitchen is referenced, the Chinese gang’s recent behaviour gets a nod, and Claire says she knows a good lawyer when Luke needs representation — presumably Foggy rather than Matt, given what happened earlier in the year…

We also get Jessica’s impact (emotionally and, importantly, literally, with a shotgun) on Luke and her clash with Kilgrave still being fresh in people’s minds, but there’s also a wider acknowledgement of the debate between the need for enhanced vigilantes and the role of the police, continuing the line from Daredevil’s second season that feels like it’s now building into something more important.

There’s also some knowing nods to the comics — beyond Sweet Christmas being uttered every few episodes, there’s a sly reference to Luke Cage’s original costume and tiara which will either amuse or enrage die hard Power Man fans, depending on how their bread is buttered.

Luke Cage feels like a far more low key series than the debuts of Daredevil and Jessica Jones, despite arguably having a far broader canvas and scope to play with. It very much feels like the first chapter — in fact, so much is left unresolved by the end that a sequel seems inevitable, although how long we have to wait given there’s Daredevil 3, Jessica Jones 2, Iron Fist, The Punisher and Defenders all on the slate, remains to be seen.

But a return to Harlem, where Luke Cage’s skills are available — if not necessarily for hire — will be a very sweet Christmas present indeed.

It’s a new teaser trailer for Guardians of the Galaxy Vol. 2 and it’s more of the same from director James Gunn and his ragtag group of not quite antiheroes…

Here’s the deal: in the first two episodes of Narcos, women do hardly anything at all.