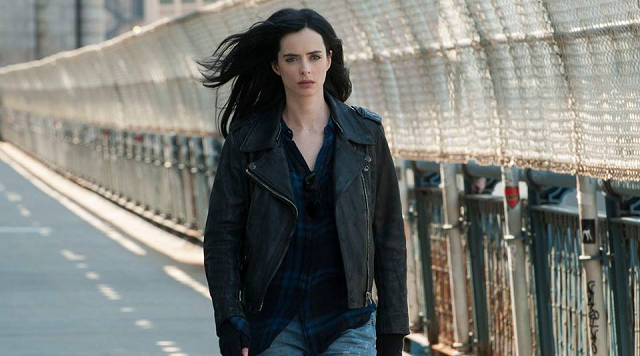 Jessica Jones had the potential to be a tough sell. For fans of Brian Michael Bendis’ original Alias comics, the character and her story is held in high regard. For the casual fans brought to the MCU through the big Hollywood films, she’s pretty much a nobody – hell, even Daredevil was at least someone they might have heard of thanks to the Affleck film.

That said, the idea of a Jessica Jones series tied into the wider Marvel universe has been kicking about for years. It’s an obvious fit for the more down and dirty, supposedly mature corner of the Marvel universe currently, if slowly, being constructed over on Netflix.

And so it’s now arrived, the second step on the path towards The Defenders being formed – and a large step at that, introducing not just Jessica but also Luke Cage to the now wildly inaccurately named Marvel Cinematic Universe.
Unlike Daredevil, which has a long and varied history of the character to draw from for its inspiration, the origins of Jessica Jones can only really be traced to Alias – and while Melissa Rosenberg’s adaptation borrows a few iconic scenes and concepts from the comics, it also plays fast and loose with the character and especially her role within the wider continuity.

As with its predecessor, though, it’s place is only tangentially within the wider universe occupied by The Avengers, Ant-Man and Natasha Romanov. Aside from another brief reference to the damage caused by the Chitauri invasion, and a couple of comparative nods at the Hulk, it lives within its own little world – a Hell’s Kitchen populated by big man gangsters, small time weed dealers, and occasionally a blind man scooting about in a red outfit punching folk.

Into this down and dirty environment, our titular hero fits well. Gifted with super strength, improved healing abilities and the ability to fly (well, jump and fall in a fairly controlled manner), Jessica Jones is a failed superhero, someone who on her first night out on the streets ends up coming under the influence of Kilgrave – a purple clad Englishman with the ability to make people do his will, and who keeps her as half bodyguard, half sex slave.

Eventually freed of his control and plagued by post traumatic stress disorder she’s now working as a down at heel private investigator, spying on cheating wives and philandering husbands, and indulging in excessive alcohol and casual sex.

But after thinking Kilgrave was dead, he comes back into her life in the form of a case, another girl taken and abused whom murders her parents on his orders – a case that ends up dragging in lawyer Jeri Hogarth, best pal Trish Walker and a superpower bar tender by the name of Luke Cage…

There’s no way of soft-soaping it – Jessica Jones is a brutal show, with a level of violence and sex on display to match, and in some instances even surpass its sibling from earlier in the year. The opening episode, which draws a lot of its inspiration from the first edition of the comic, starts with a man being hurled through a plate glass door, chucks in a fairly explicit bit of sex, and pretty much sets the tone from the off.

There’s some wonderfully clever scenes to demonstrate the show’s violence, which neatly reflect the superpowers on display. An early scrap involving Jessica and Luke in a bar is almost casual, neither even having to put any effort into swinging a punch or throwing an assailant across the room. Only when they face each other, or when Jessica’s facing vast numbers of thugs while nursing an injury, does there become any effort to her actions.

On the other hand, there’s moments of extreme violence and horror that at times are jaw-dropping. The end of episode one sets the tone for the rest of a show that sees people maimed, brutalised, stabbed, slashed, decapitated, shot in the face, set on fire, electrocuted, stabbed again and smashed through interior walls in anger so often you get a sense of what it must feel like to be Kevin McLeod. And that’s just the good guys.

The TV version is far more sexualised too – there’s no ambiguity about the sexual torture inflicted by Kilgrave on his female victims, and especially Jessica, but the camera also lingers on Ritter’s exposed body a bit too much – in particular one extended shot of her backside as she climbs a ladder. On the one hand it’s a show that’s very grown up about sex, and on the other it’s got moments where the direction feels almost trashy.

At the heart of Jessica Jones are three impressive central performances. Krysten Ritter powers through the dialogue like an angry goth cottonbud, able to convince of Jessica’s vulnerability and almost invulnerability at the same time. It’s a million miles away from the sassy roles Ritter’s specialised in elsewhere, turning snark into horribly damaged anger, and she pulls it off with aplomb. David Tennant, meanwhile does his best David Tennant, adopting his Casanova accent (to the relief of anyone who’s heard him try to do an American one) and delivering a cocky and at times OTT performance that sometimes out of step with the more naturalistic performances around him – but it just about comes off, thanks to the balancing, broodingly dangerous moments when we see the real Kilgrave.

But the real standout is Mike Colter, who not only steals ever scene he’s in as Luke Cage, but gives real hope for his own series next year being just as good as Daredevil and Jessica Jones. Someone who manages to invest the truly ridiculous catchphrase Sweet Christmas with this much believability deserves his own show, frankly.

That central trio, along with Rachael Taylor as Jessica’s best pal and Carol Danvers stand-in Trish Walker, are the main focus on a story that concentrates on Kilgrave, Jessica and the impact they have on each other, with other people’s lives being collateral damage along the way. The idea of a Kilgrave support group, something that seems faintly ludicrous to start off with, becomes transformed into a nightmarish mode of revenge for both sides. It’s pretty safe to say there’s no real happy endings anywhere in Jessica Jones.

But the focus of the whole story being about Jessica and Kilgrave gives the show a pacing problem – with 13 episodes to fill we end up with a lot of red herrings. There’s around three or four episodes worth of padding and shuttling back and forth that could be lost without damaging anything, particularly with the boiled down storyline. A couple of those clearly feel like set-ups for Jessica Jones series 2 which, you’d think, would be a given after this. The only challenge now is, with Daredevil 2 to come on an increasingly crowded slate, where to fit the follow-up into the schedule.

Like Daredevil, Jessica Jones is about making the choice to be a hero, and the consequences that has – in this case, the damaging, almost destructive impact when being a hero doesn’t work, particularly illustrated in the show’s remarkable final scene and closing shot. It’s a remarkable 13 hours of television as a result – downbeat, challenging and still fired up with enough action and drama to keep the casuals happy.

All superheroes have an origin. Most of them have a huge family business to take care of. Few of them have parents.

Another promo for Marvel’s Avengers spin-off