TV REVIEW: HOW I MET YOUR MOTHER SEASON 6 EPISODE 17 ‘THE ASHTRAY’ 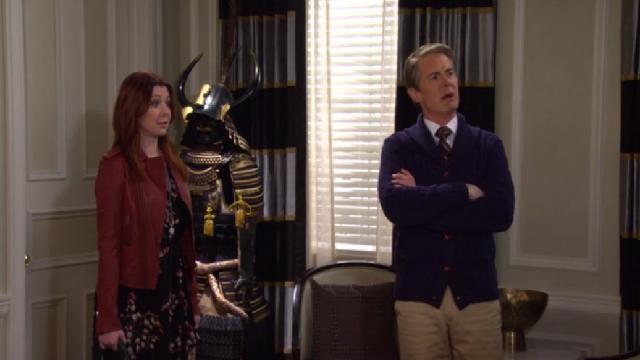 RECAP: Ted receives a phone call from The Captain and recalls their last meeting at an art gallery, but both Lily and Robin recall events very differently. When The Captain asks to meet Lily, he makes her an offer that could change her life.

REVIEW: This is a familiar format for How I Met Your Mother but still manages to pack an emotional punch. The Captain was the best character to come out of the season 6 Zoey ark and it’s always great to see Kyle MacLachlan on screen doing his creepy yet genial performance. Even better that his presence has a genuine purpose, driving forward the story and the life of one of the characters.

An single event told many times by multiple unreliable narrators is a pretty classic structure for How I Met Your Mother but when it is done this effectively and to strong comedic effect, there’s nothing wrong with a little familiarity.

There are some decent running gags with Marshall desperate to get back on The Captain’s boat and Barney’s sadness that the gang might have a story that doesn’t involve him. Also, Josh Radnor and Cobie Smulders bring some strong stoned and drunk acting respectively.

The story of the gang’s trip to an art gallery is pretty slight but it packs an emotional punch when The Captain insults Lily’s credentials by telling her that she is “just a kindergarten teacher”.

Lily’s frustrations at her lack of art career have been explored as far back as the first season and the reason she ran away to Paris and broke Marshall’s heart. Lily has the seemingly perfect life but it is one she has fallen into rather than chosen.

Her breakdown in front of Marshall packs a convincing emotional punch and as Joss Whedon knew back in the Buffy days, no one more cries better on camera than Alyson Hannigan. Her rejection of Marshall’s insistence that all her dreams will still be realised rings a certain truth and Marshall’s reaction shows he knows it’s true. So kids, today’s lesson is that sometimes growing up means letting go of what you really want.

But hey, even if it seems like some things have been lost, we’re still in a sitcom so everything has to end happy. After Lily recommends a painting and it turns to profit, The Captain offers Lily a job as his art consultant it ties up Lily’s art loving story pretty perfectly. We are nearing the end of the show and all things set up are starting to pay off. The Captain was there for a reason and not just to be a foil for Ted. How many other incidental characters will turn out to be important before we say goodbye to the McLaren’s gang?

CALLBACKS: There’s some lovely thematic callbacks with “Boats, Boats, Boats” Becky and The Captain both in the same episode.

Aldrin Justice comes into play when she steals The Captain’s ashtray after he was mean to her. This was first seen with Ted’s boss in season 2.

As this episode is mostly flashback, we get to see a play from The Playbook, this time ‘The Royal Archduke of Grand Fenwick’.

TV Review: How I Met Your Mother Season 9 Episode 16

Let’s look at this from a different angle

TV Review: How I Met Your Mother Season 8 Episode 24

It’s the series finale of How I Met Your Mother