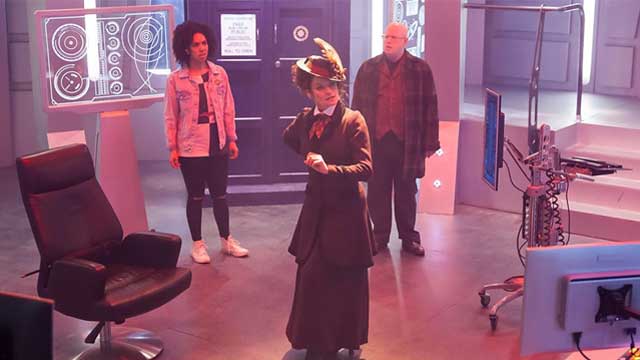 The Doctor decides to test Missy by letting her take the lead in answering a distress call on a massive colony ship. What seems to be a simple mission of mercy becomes far more complicated when Bill becomes separated from the rest of the TARDIS crew at the other end of the ship where time is moving much faster.

You know the name of this website? We’re going to live up it for once. Consider yourself warned. DID YOU SEE WHAT THEY DID AT THE BEGINNING? The Doctor is regenerating in a snow-filled landscape and he doesn’t seem happy about it at all. His longer hair seems a clear indication that this was filmed during the Christmas special. Can anyone close to the production confirm this?

Yup. Shot as part of the Christmas production. WHICH IS GOING ON RIGHT NOW!

THANKS! Also, the Master is back. John Simm as the Master. I spent a good 40 minutes trying to work out how I knew the voice of creepily-made-up weirdo Razor because I am a fool. “It’s Ralph Little isn’t it?” the tired TV reviewer muttered while sort of being sure it wasn’t. It’s nice to see him actually looking and acting like the Master after some, hmmm, bold acting decisions during the time of the Tenth Doctor. It’s all about the beard.

Okay, fannish ranting over. OH MY GOD, THERE WERE MONDASIAN CYBERMEN!!! Right, that’s out of my system now.

‘World Enough and Time’ is stunningly directed. Rachel Talalay puts many horror directors to shame, effectively using lighting, sound and camera angles to perfectly construct a terrifying world at the bottom of the ship. The Mondasian Cybermen really shouldn’t work. They’re an antiquated design that in the wrong hands should just look naff. Instead, they are absolutely terrifying. Silent, pained, broken humans, augmented with crude technology. It’s genuinely chilling.

That’s in sharp contrast to the bright future in the control tower up at the top of the ship where the Doctor-heavy elements take place. Really, much of this episode only uses a couple of sets but there’s a grand sense of scale, and much of that is down to the beautiful effects work. They properly capture the sense that this ship is huge in a way that something like Red Dwarf never quite manages.

Speaking of Red Dwarf, the idea of a ship being sucked into a black hole with each end operating in different time zones plays a major part in the second novel Better than Life. It’s a great idea and it’s been done  justice in this episode but you can’t help but think it could have used a talking toaster.

DID YOU SEE? THEY PUT A HOLE THROUGH BILL WITH A SPACE GUN! THAT WAS BRUTAL.

Bill, once again is the heart of this episode. Killing her early is genuinely shocking but her new life down at the lower levels of the ship is fascinating. Pearl Mackie brings a brilliant sense of unease as well as acceptance of her fate as she spends years waiting for the Doctor and forms a bond with the Master in the guise of a creepy old man.

This is the best Cybermen story this version of Doctor Who has ever done. They are scary and believable for the first time and not just dull metal suits. That’s some achievement.

While this episode is great in itself with ann intriguing cliffhanger, there are questions unanswered and there are only two episodes left to end an era. Why did the skeleton crew stay at the bottom of the ship and build a city? Why is the Master there and why is he making this happen? Will this tie in with next week? Why doesn’t Missy remember being there? Why show the regeneration (even if it looks stunning)? Is this actually going to tie into First Doctor story ‘The Tenth Planet’?

In all likelihood, some will be completely baffled by the big reveal and just ask “who is that guy?”. It has been a while since we’ve seen Simm and really, it’s not a simple explanation, even with a bit of foreshadowing. That’s a minor gripe.

Anyway, it’s an enthralling episode, utterly creepy, dramatic and with a cool science-fiction idea at the core. Next week can’t come soon enough. Then you just have to wait another six months for the conclusion. Time moves far too slowly on this side.

Bill moves into a house share with some of the students from the university and when they’re approached by a strange landlord, they find a huge property that seems to good to be true.

Doctor Who returns to screens on 19 September 2015 for 12 new adventures in times and space.

Two worlds collide when the Doctor meets Bill, and a chance encounter with a girl with a star in her eye leads to a terrifying chase across time and space.