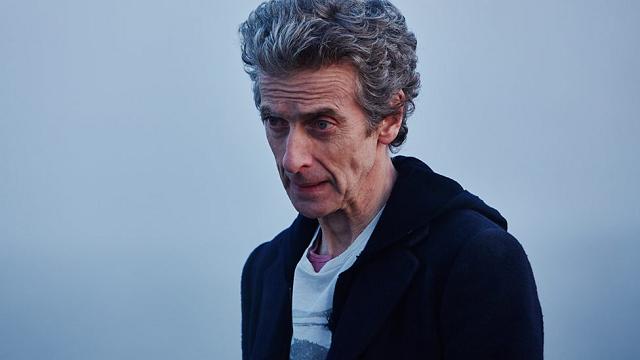 SYNOPSIS: The Doctor is trapped on Skaro, planet of the Daleks, and is forced to face Davros one last time. Meanwhile, Clara and Missy must put their differences aside in order to mount a rescue through the Dalek sewers.

REVIEW: From the audacious, planet hopping, action-packed part one, we arrive at part two and tonally it couldn’t feel more different. This episode is essentially a couple of two handers, with the Doctor enjoying a deep conversation with Davros about the nature of war, and Clara and Missy working together in a screwball Dalek comedy.

There’s something rather appealing about just locking Peter Capaldi and Julian Bleach in a room and letting them act. They are a couple of retired generals, going over old battles and questioning their morality, each convinced that they’re in the right. At its best, the writing is so powerful, that it actually makes you feel sympathy for the cruel and insane dictator Davros as he grows close to his dying breath. The Doctor’s compassion is genuine and this emotional core provides some excellent pathos to the episode.

Therefore when it’s all revealed to be part of another of Davros’ elaborate plans to make the Daleks more powerful, it just feels a little bit disappointing. Of course, that was going to be the way because this is Doctor Who; it’s Saturday night sci-fi entertainment, but it just feels that this conclusion is setting up another story, rather than telling an interesting one in itself. Asking the question, “does an evil man deserve forgiveness on his deathbed?” is brave but making sure that he feels like a cartoon villain at the end is a little cheap.

In the B-plot of the episode, it turns out that Missy and Clara survived the Dalek extermination, as if anyone ever thought otherwise. The explanation is completely satisfactory and also explains how Missy survived the season 8 finale. Satisfactory doesn’t really feel like enough though because it was such an compelling cliffhanger that you want the reveal to blow your mind. That’s not so much a problem with cliffhangers, but more with Doctor Who in general. The audience gets built up into a frenzy and spends the week speculating and then you find out that it was all done with the flick of a switch, you wonder what the point in creating a cliffhanger was in the first place.

That’s not to say that the exposition wasn’t done with style. Rather than leaving it to snappy dialogue, Steven Moffat takes full advantage of the visual medium and writes a great mini adventure for the Doctor to explain, which is directed with great style by Hettie Macdonald. The problem is, that this scene rather dissects the very nature of the Doctor Who, showing that not just why the title character always wins, but how, which would appear to prevent the show from ever having any form of long lasting peril.

Missy takes Clara on an adventure through the Dalek sewers, before capturing a Dalek and putting Clara in its shell. Putting Clara into a Dalek is a really interesting idea, and was far more effectively done in ‘Asylum of the Daleks’ from season 7. All of this B-plot is setting up the big finale where the Doctor saves the day. Did you know Daleks never die and are angry about it? No, but I bet that will come up later? Did you know that no matter what emotion you express, the Dalek armour translates it into rage? No but hey, I’m sure that will tie the episode up nicely. There are some really neat ideas in there, and its incredible that there is still so much to explore with the Daleks but much of the time, it feels like you are seeing the wheels turn behind the curtain.

There’s not a great deal wrong with this episode, but after such an bold set up, it feels like it could have been something special, and up until the point Davros reveals he’s a lifelong member of the supervillain society, it is. It’s just that after that it feels like Doctor Who by numbers.

The episode deal with some big ideas, and it’s incredible that they’re being explored in this format, but it just feels like a tantalising glimpse of something more before the show falls back towards familiar ground. That ground is well worn and it’s a path that reaches some great destinations, but we’ve been here so many times, that familiarity is starting to breed contempt.

The Doctor Who Christmas Special teaser is here

The Doctor will return

The Doctor and Clara return for this series 9 premiere