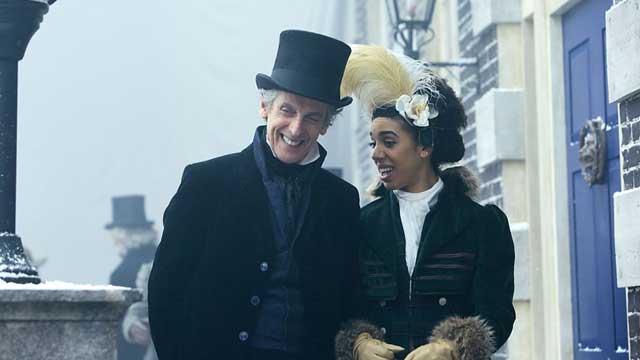 The Doctor and Bill unexpectedly arrive in  1814 to discover a frozen Thames hosting London’s biggest frost fair. While Bill is apprehensive about meddling with the past, the Doctor convinces her to enjoy the moment, but when people start disappearing beneath the ice, the Doctor begins to question the Doctor’s moral compass.

If you’ve read my reviews of episode 1 and episode 2 of this season of Doctor Who, I’m sure you won’t be surprised to read that my expectations were a little frosty ahead of ‘Thin Ice’ as series 10 feels a little disappointing compared to where we were this time last season.

Following the most successful new companion episode blueprint (or the present, future, past sandwich* as I like to call it), we find ourselves in Regency London and Bill’s first adventure in the past. As with the last couple of episodes, this is another slow burner which takes almost three quarters of the running time to gain momentum. That said, the slow pace of the episode allows the Doctor and Bill’s relationship to be explored in a much closer way than we have seen with previous companions. It also allows the Doctor to be seen in a kind of off-duty Doctor way – this is what he’s like when he’s not trying to save the universe and this offers some insight into what he’s like when we don’t see him on screen.

The story isn’t about a scary big monster, it’s about morality, especially the Doctor’s and in a much more human way than him repeatedly asking Clara if he’s a good man. Throughout, points were made about racism, whitewashing and slavery which were tackled head on and in a much more direct way than we’ve ever seen before. The issue inevitably arose in Season 3 in the Doctor’s adventures with Martha Jones, however comparative to the way ‘Thin Ice’ dealt with racism – the Doctor uncharacteristically turning to violence when a snooty aristocrat insults Bill – that actually makes it look like lip service to the issue rather than the bloody lip delivered by writer Sarah Dollard. The real monster of the episode, Lord Sutcliffe was a understated villain with a believably evil undertones, which never resorted to the sometimes pantomime-esque cliches of the traditional baddy, making him all the more sinister.

Something that did trouble me about the story was a sense of déjà vu . Once again, this episode felt like a mish mash of stories that we’d seen before. The human devouring creature beneath the Thames was far too similar to the Star Whale in the Beast Below. Bill’s reactions to the boy getting eaten had echoes of Donna Noble and you could easily be read the episode as ‘The Fires of Pompeii’ on ice. That lack of originality failed to sell the episode to as a whole, the monster was uninspiring and the resolution had been done all too many times before.

Whilst the episode didn’t send my pulse racing, it did nicely remind us where we are and what the series as a whole is about. Towards the end, I did wonder how different the story would have been with Clara still in place which reminds me how lucky we are to have Pearl Mackie’s Bill Potts on board the TARDIS this season. Her zingy realness has been what’s kept the series buoyant over the past couple of weeks and have almost made up for the weak plots and uninspiring foes.

Fans will no doubt be thankful for the final scenes in which Nardole was guarding the vault, with the inhabitant now unhappily banging on the door. The vault will no doubt be seen for many as the season’s dangling carrot hopefully its reveal and what that means for the Doctor will provide longer term viewers with something more substantial than a pot of sonic screwdrivers and a photo of Susan Foreman.

*Some of most popular companions to date have been introduced by meeting them in the present, going into the future and then into the past.

There’s clips from the episode and everything

This week we are looking at a TV trailer with Doctor Who’s return to TV in 2005.

Doctor Who: Prequel to Bells of Saint John

Who is The Doctor talking to in this prequel to The Bells of Saint John?