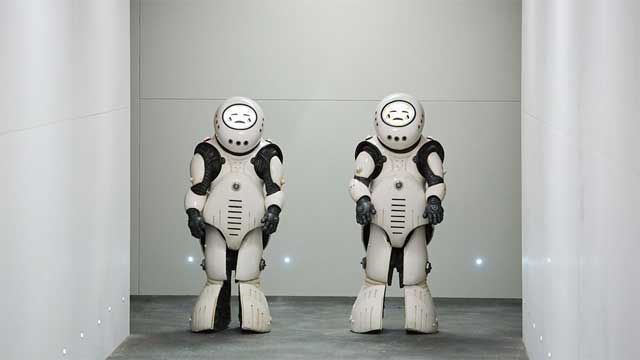 SYNOPSIS
The language of the future is emoji! The Doctor takes Bill to a spectacular city on a distant planet – but where are the colonists? A band of ‘cute’ droids holds the deadly answer.

REVIEW
The Emojibots work on the basis of heart on sleeve (or emoji badge on back in this case) honesty so in the interests of full disclosure I started watching with a grumpy face. When I saw that Frank Cottrell-Boyce was returning to Doctor Who, I was concerned. His 2014 episode ‘In the Forest of the Night’ is easily down there with some of the stinkers of the revived series including ‘Love and Monsters’, ‘Fear Her’ and ‘Night Terrors’ to name a few.

‘In the Forest of the Night’ and ‘Smile’ have much in common. The premises are actually quite interesting are the kind of ideas that can be immersed in the Whoniverse. ‘Smile’ is definitely the stronger concept out of the two and the idea of deadly Emoji robots feels current in the same way as the ATMOS killer sat-navs from series 4. There is a subtle cleverness about taking something in our everyday lives and making it into a monster and making artificial intelligence terrifying is a compelling idea. This is ultimately at the heart(s) of Doctor Who as it freaks out kids and gets them watching from behind the sofa.

In his preview of the episode, outgoing showrunner Steven Moffat praised the high production values and I have to agree, this is one of the most convincing locations we’ve seen in the show’s history and a welcome departure from CGI and of course the overused quarries of Wales. The look and feel of the episode is so glossy it could be mistaken for a Black Mirror kiddies’ spin off.

The structure of the episode however was nowhere near as pleasing and very messy to say the least and it feels like its been badly jumpstarted.  The pre-title scenes from Nardole’s entrance onwards were clunky, cluttered and really pedestrian

Looking at the bigger picture of the whole series, it does seem like a strange place to dump what is essentially a ‘filler’ episode (usually saved for between weeks 6 & 8) with far too much pocket money. The whole episode could have been easily done in half the time – there’s more filler than in Lady Cassandra’s face! Moisturise me!! moisturise me!!

Whilst the premise of a colony of Emojibots does sound interesting the execution of it needed to have been done better and feel more original.  This episode feels like the scripts for ‘The Beast Below’, ‘Gridlock’, ‘The Waters of Mars’, ‘Silence in the Library’/’Forest of the Dead’ and ‘The Girl Who Waited’ were found in the bottom of a paper shredder and badly sellotaped together. which is disappointing given the potential an idea like this could offer. This is up-cycling at its ugliest.

Ralph Little and his sleeping humans would be the most boring part of the episode if it weren’t for the resolution which is probably even worse than ‘In the Forest of the Night’. Simply rebooting the Emojibots was dull and really amateur. Whilst we don’t need a polarity reversing, wibbly wobbly explanation of every single story, we do expect better than this kind of dead end which should be confined to the classic era of Doctor Who which had 1 story over 4-8 weeks and needed half-arsed easily reversible “cliffhangers”.

To conclude on more of a 🙂 than a ☹ , Bill’s freshness needs to be commended. This lukewarm episode would have been much flatter if it weren’t for Pearl Mackie’s sparkling performance. Seeing this episode through her eyes added some much needed warmth, humanity and realness to the episode. The blame for such a lacklustre episode really needs to lie at the feet of Steven Moffat who should have quality-controlled this story. I’m hoping that this is the last official Doctor Who canon that Frank Cottrell-Boyce is involved with as his stories and his style aren’t vibrant enough for our Timelord.

It’s all new for series 8 of Doctor Who

TV review: Doctor Who series 11 episode 1 ‘The Woman Who Fell to Earth’

In a South Yorkshire city, Ryan Sinclair, Yasmin Khan and Graham O’Brien are about to have their lives changed forever…