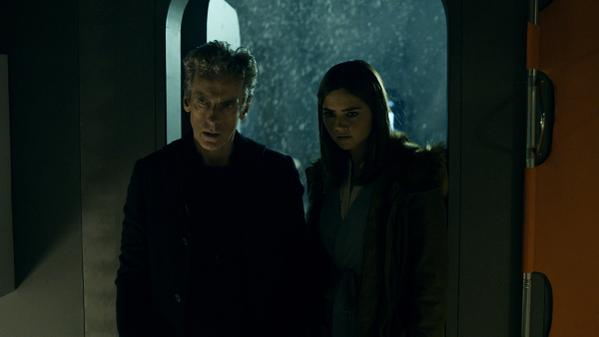 Doctor Who Christmas Specials can be a bit of a mixed bag. They often face the problem of being the beginning of a new era – David Tenant’s premiere ‘The Christmas Invasion’ – or the end – like ‘The Time of the Doctor’ from last year. These episodes tend to have elements that are somewhat caught up in the deeper mythology of the show, which isn’t ideal for people slowly digesting a sleep-inducing mix of meat and carbohydrates. Then again when the episode is just a light post meal aperitif, ‘The Doctor, the Widow, and the Wardobe’ for example, it can be so light that’s it’s forgotten while you’re watching it.

‘Last Christmas’ is showrunner Steven Moffat’s fifth attempt at a festive slice of Who and it seems he’s finally nailed it. This feels more like a standard episode of Doctor Who than any other special that has come before. Santa plays a big part, but essentially this is an episode about people trapped on a remote base at the North Pole, which may not be all that it seems. If you were pitching it in a high concept way, you might say that it’s The Thing meets Inception meets Santa Claus: The Movie. What’s not to like? Except Santa Claus: The Movie obviously.

The big bad of the episode are Dream Crabs, face hugger aliens who render their victims unaware of their pain by creating the anaesthetic of a happy dream state. The power of these dreams is that the victims don’t know that they’re unconscious and so put up no defence. It was an idea explored to great effect in Grant Naylor’s Red Dwarf novel ‘Better than Life’ and it provides a perfect way to explore the psyche’s of the characters in a more explicit way than reality might allow.

The main plot with the North Pole is Doctor Who by numbers, even if it is surprisingly scary for festive fare, at times echoing the terrifying 2009 episode ‘The Waters of Mars’. The supporting cast all have the right number of character traits to make us care if they die, with Faye Marsay’s Shona winning the “I wish she was a full time cast member” award. All that stuff is really filler, a backdrop to the emotional core of the episode, The Doctor and Clara confronting the lies that they told each other.

That’s all very nicely done too without being overplayed. There was a sense last season that we were being told how close the Time Lord was to his companion without it ever really having been earned, but following last season’s finale it really feels like they are friends with a deeper history and Capaldi and Coleman play wonderfully against each other . Their final scenes together should leave the viewers looking forward to another year of adventures, even if the teased out ending would have been quite a neat and way to tie up the relationship in a very Steven Moffat way. Capaldi now owns the part and rather than playing the role of “the new Doctor”, as he was for much for last season, here he’s just playing the Doctor.

In reality, this episode could have taken place at any time of year but Moffat has rather cleverly inserted Nick Frost as Santa. Within the dream state he represents the saviour of the human spirit, and it’s an effective way to incorporate Christmas and get some seasonal shots,into the story like the glorious image of the Doctor flying a reindeer-led sleigh, without overshadowing the central premise. Frost is a delightful presence and brings a lightness to what might have been a slightly-too-grim episode.

It may be a slight story but the premise is taken to a satisfying conclusion, the action is superbly directed and it may even bring a tear to the eye. It’s almost a perfect Christmas special. God bless us, every one.

TV Review: Doctor Who Series 9 Episode 3 ‘Under the Lake’

The Doctor and Clara arrive on an underwater base in the 22nd Century. They find surviving crew haunted by ghosts with murderous intent with the apparitions apparently caused by mysterious alien spaceship.

Doctor Who series 11 – the first trailers

Doctor Who returns to BBC One and BBC America this autumn with a new Doctor, new companions, a new logo and even a new showrunner.

It’s always important to let your spin-offs stand on their own two feet and not rely too much on the mother show, otherwise that might set a bad precedent going into the series…