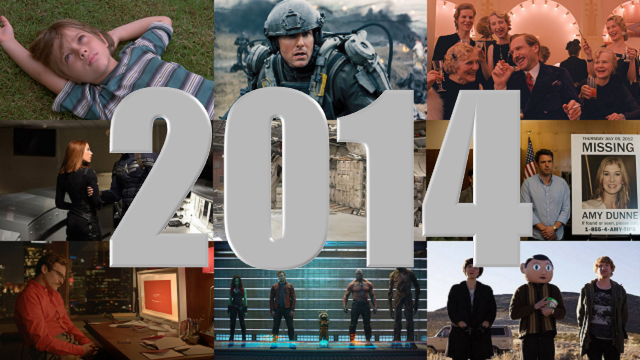 2014 has quite literally been a year full of movies. You can hardly go to the cinema without seeing one. There are some movies that I’ve not gotten around to seeing yet (Nightcrawler, The Imitation Game, Pride) and for that I hang my head in shame. The issue with these kind of lists are they are subjective and my own opinion. As a well-known movie critic says, ‘Other opinions are available’ and he is quite right. Feel free to agree/disagree.  I’m always interested to hear your thoughts. I’ve been careful to avoid spoilers so you can read without fear. So, here we go, funnily enough, with Number 10. 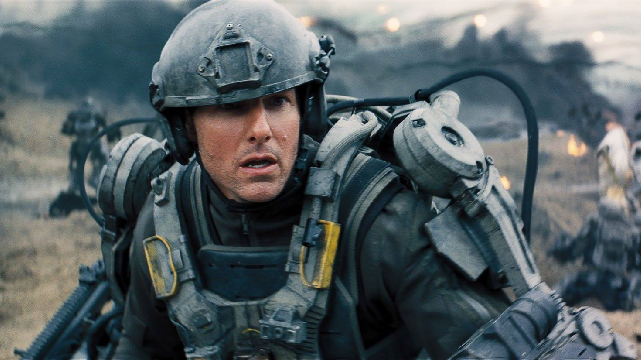 This is the perfect example of movie marketing gone wrong.  Originally marketed with the name Edge of Tomorrow and now renamed Live. Die. Repeat: Edge of Tomorrow for home release this movie should have performed so much better at the box office than it did. It’s an extremely clever movie with a very interesting arc for Tom Cruise’s character and a strong, feisty performance from Emily Blunt. The confusing concept (Groundhog Day meets Aliens via Independence Day?) may have put audiences off but those that watched it witnessed a superbly entertaining movie that delivered action, suspense and more than a few laughs. 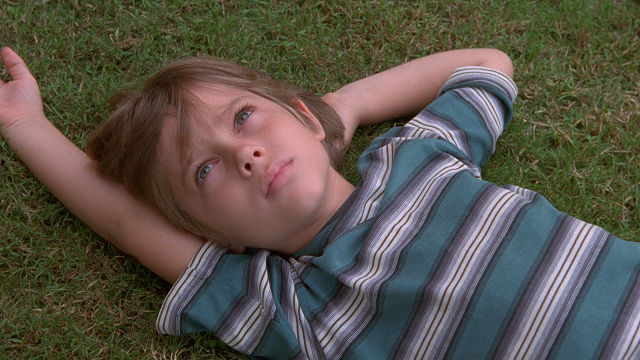 Richard Linklater’s tale of the life of a family over 11 years (filmed over 12 years) is so much more than a gimmick. It is heartfelt, real and is anchored by a great central performance from Ellar Coltrane. The near 3 hour running time flew by for me. Superbly edited and subtle (there are no ‘x year later’ title cards flashed up at any point) it tells a genuinely moving tale of a boy, his fractured family and all of the ups and downs of growing up.  Accompanied by a great soundtrack and very real performances from Ethan Hawke & Patricia Arquette, this movie is a great portrait of family life in Middle America

8 – Guardians of the Galaxy 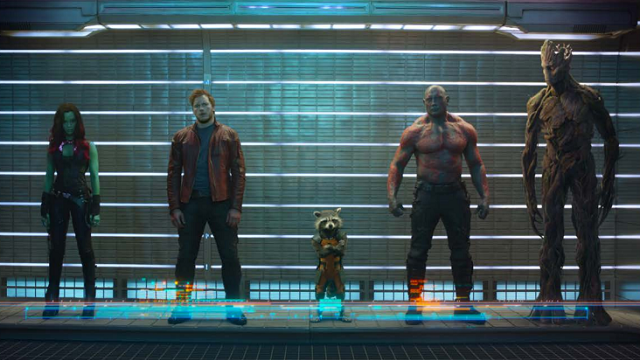 Initially seen as a risk by Marvel Studios, (A talking racoon? A talking tree?) Guardians of the Galaxy was a bona fide hit, blending sci-fi, comedy and adventure in a perfect way. (The less said about Thanos, the better). Guardians is incredible fun, with a kick-ass soundtrack (ooga chaka, ooga ooga!) and great performances. Chris Pratt’s Peter Quill (aka Star Lord) is the leader of this gallant band of thieves and misfits, channelling Han Solo & Captain Malcolm Reynolds with aplomb.  The film zips along like a rollercoaster ride with exhilarating action sequences and great gags aplenty. Dave Bautista has some of the movie’s best lines as Drax, while Vin Diesel has only one line in the entire movie (Okay two lines) but his character is still charming and responsible for one of the movie’s more dramatic moments. When I saw this movie, it felt like watching Star Wars for the first time as a kid, full of excitement and fun. This may have seemed like a gamble by Marvel, but it sure as hell worked. 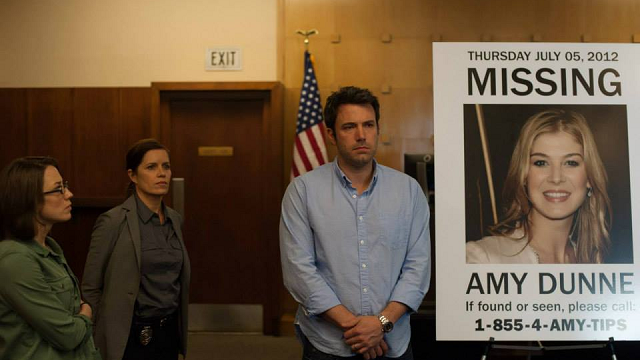 A deeply disturbing thriller that stayed with me long after I’d left the cinema. This gripping movie is much more than a standard ‘whodunit’. David Fincher’s direction is not as flashy as in his previous work; it is much more cold and clinical which suits this story very well. The score is very unsettling and really adds to the atmosphere and tone of the movie.  The movie isn’t afraid to look at the darker side of the human psyche and some of the characters behaviour is quite repugnant at times, but you will not want to take your eyes off of the screen. Ben Affleck gives a great performance as Nick and has great support from Tyler Perry as his lawyer but Rosamund Pike steals the movie out from under them as Amy. 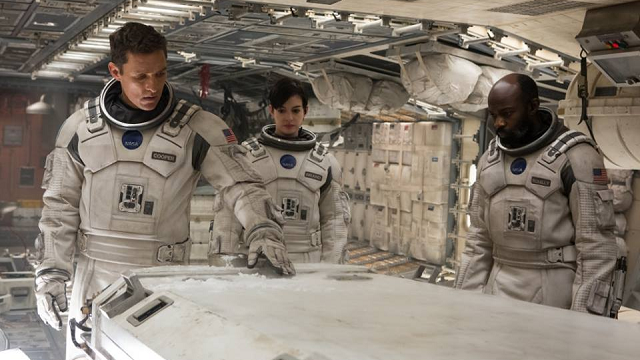 Christopher Nolan’s space odyssey that isn’t really about space. It’s about fatherhood, loss, time, gravity and some real head scratching physics! You can clearly see some of Nolan’s influences here but the visuals for me were truly outstanding. This movie looks beautiful in places and it must be viewed on the biggest possible screen. When I first saw the movie I tweeted: ‘Interstellar: I know I’m late to the party here but wow. Just wow. I loved it until a certain point and then I didn’t love it quite as much’ I still stand by that review.  Beautiful, heart breaking, baffling, full of wonder and we have the bonus of Hans Zimmer banging on his organ. Great performances all round from the cast with a standout performance from MacKenzie Foy as Murph. That girl is going to be a star.  If anyone wants to get me anything for Christmas, I’d like a TARS please? Thanks. 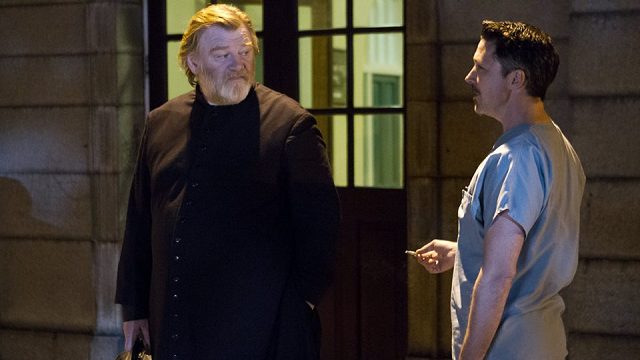 With quite possibly one of the most startling opening lines of dialogue delivered in any film this year Calvary grips from the very start. Brendan Gleeson is absolutely superb as Father James, a good natured priest that is coolly informed during a confession that he will be murdered at the end of the week.  As the week rolls on he must find out who his would be killer is. This movie is full of superb performances, nobody puts a foot wrong. Chris O’Dowd is a revelation here and Domhnall Gleeson’s cameo chills the blood. The growing sense of dread is palpable throughout the movie but it never loses its dark sense of humour and the entire film is anchored by Brendan Gleeson’s wonderful, world weary performance. If you haven’t seen this yet, do yourself a favour and check it out. 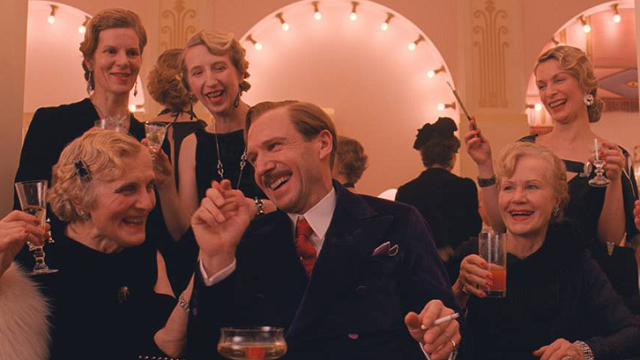 Wes Anderson’s most Wes Anderson film to date is a beautifully designed and shot romp set in the fictional Republic of Zubrowka, where the titular hotel stands. Ralph Fiennes performance could well be his career best as M Gustave, the charming, suave and frankly ridiculous hotel manager that also has a potty mouth that makes your eyes water.  I saw this film as a love letter to cinema (each time period in the story has its own aspect ratio) and Anderson’s sense of whimsy is turned up to 11 here. Some Anderson regulars fill out the cast wonderfully. Willem Dafoe stands out as an evil henchman who is quite vampire like in appearance, while Jeff Goldblum gives great support too. If you’re not a fan of Anderson, this may not be for you, but if you fancy something quirky that zips along at a great place and is full of laughs, this could be the film for you. 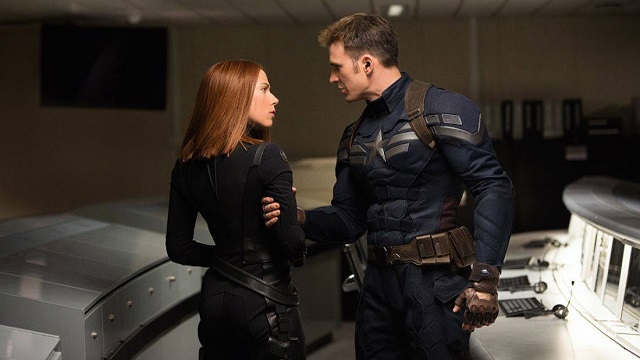 Steve Rogers returns in a superb sequel which outshines The First Avenger quite easily. This film was a real game changer for the Marvel Cinematic Universe and the repercussions of what happens within will be felt far and wide. Part comic book movie, action adventure with a tinge of 70’s conspiracy thriller thrown in, I loved this movie. Full of great action sequences and very well-choreographed fights (never get in a lift with Cap) The Winter Soldier is a movie that thrills and entertains. My only quibble is the last section of the movie feels too damn similar to what we’ve already seen in Iron Man 3 & Avengers Assemble Some Flat Pack Furniture but that is only a small criticism. Robert Redford is delightful here (if you haven’t seen his outstanding performance in All is Lost check it out) and Chris Evans (not that one) is perfect as Steve Rogers. His chemistry and on screen relationship with Scarlett Johansson’s Black Widow crackles, they are a great pairing. Superb fun, look out for a great Pulp Fiction reference near the end. 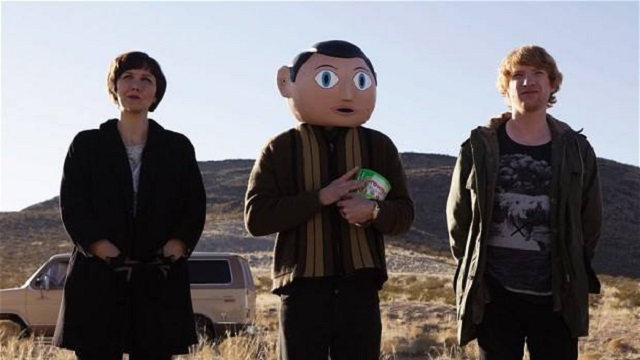 This movie is very loosely based on the life of real life comic creation Frank Sidebottom and it surprised me in so many ways, very nearly taking the number 1 slot for the year. Domhnall Gleeson plays Jon, a young and unsuccessful musician that fate brings together with strange, experimental rock combo ‘The Soronprfbs’ led by the mysterious and enigmatic Frank. (Michael Fassbender).  I was totally unprepared for how this movie made me feel. It is very funny and emotional with tons of pathos and heart. The soundtrack is incredible (‘I Love You All’ is a modern classic) and Fassbender brings such commitment and energy to the central role. The movie has been criticised for being too weird and quirky and having a downbeat last act, personally I think that is a good thing.  Watch the movie, listen to the soundtrack and it will stay with you for a long time. 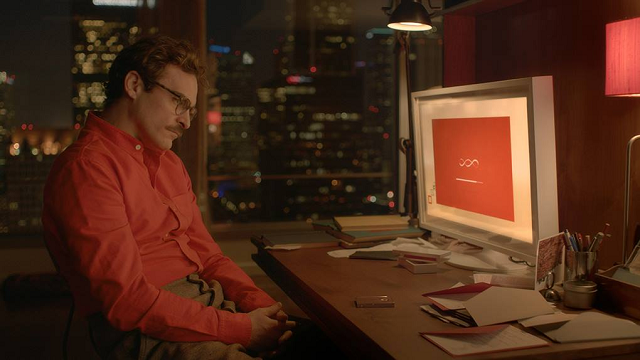 Made in 2013 but not released in the UK until this year, Her takes the number one place in my top 10 of the year.  This film feels like a beautiful love story spliced with Charlie Brooker’s excellent series Black Mirror. Joaquin Phoenix gives a wonderfully nuanced performance as Theodore, a lonely man that forms a romantic relationship with his computer’s operating system, Samantha (Brilliantly voiced by Scarlett Johannsson).  Samantha adapts to Theodore’s needs quickly, she immediately understands him (digesting a person’s entire online digital footprint helps) and in a sense becomes the perfect companion for him.

The concept is strange, but it really works. Set in the near future, the film can be seen from many different ways. It is a love story, a satire, social commentary on mankind’s dependence on technology and how ultimately it can isolate us from each other, as well as bringing us together. In this near future it seems that nobody really talks to one another, as people do their daily commute, they are engrossed in conversations with their phones, not each other.

The central relationship between Theodore and Samantha is so beautifully played; you truly believe that there is a genuine love story here. All of the usual relationship issues become apparent, even though one is a human and the other is not.  A film for hopeful romantics everywhere, with a beautiful story that made my heart ache.

So there you have it, there’s my top 10. There were a few other movies that skirted on the edge and very nearly made it in (Under the Skin, The Lego Movie, X-Men: Days of Future Past, Dawn of the Planet of the Apes) but the problem with a top 10 list is you can only pick 10 movies.

Feel free to disagree with me; I’d love to hear your comments.

Will the Winter Soldier warm your hearts?