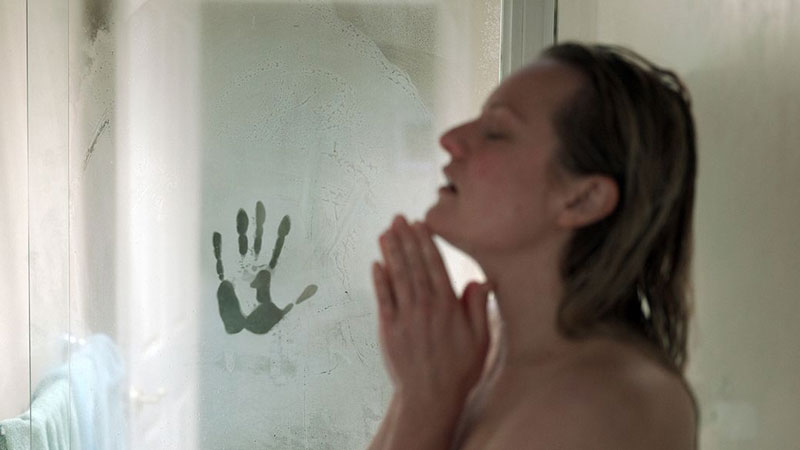 Seeing is believing, or so they say, yet it is so often the things that we cannot see that hold the most power over us. Sometimes it is merely the thought of something frightening that makes the hair on the back of your neck stand up. That bizarre feeling of being watched when you’re sure nobody is there, the goosebumps on your arms causing you to shudder.

Our imaginations go into overtime, convincing us that something is there, something we can’t see but can see us; something dangerous. Leigh Whannell taps into this odd fear with his latest film The Invisible Man, thrilling audiences with a villain that stalks his victim in broad daylight; it is no longer just the things that go bump in the night to be afraid of.

Scaling a large concrete wall and running terrified in the early hours of the morning, Cecelia (Elizabeth Moss) has finally escaped her abusive husband Adrian (Oliver Jackson-Cohen), a tech genius with a background in optics. Despite her newfound freedom, she still finds herself trapped by the terror her captor put her through.

When Cecelia hears news that her husband has committed suicide, she can at last breathe a sigh of relief. This new lease of life doesn’t last long as Cecelia is haunted by the memories of her abusive ex and soon becomes convinced that he’s back to commence his controlling torture.

Whannell uses every inch of the screen to his advantage in creating tension and encouraging audiences to second guess their own vision. Did that knife move slightly? Was that a shadow there? Where is he, could he be there?

Whether it is Adrian’s spacious yet claustrophobic home or Cecelia’s cosy yet quickly infiltrated safehouse, Whannell lulls audiences into a false sense of security before quickly pulling the rug from underneath them; using a clever little sound mix to suggest Adrien’s chilling return.

My own eyes darted around the screen like Cecelia’s as she nervously scanned the room, waiting for her nightmare to show himself. Then before you know it his phantom hand is clutched around her throat and your own breath catches at the fright of it all.

Cinematographer Stefan Duscio does a fantastic job at encouraging audiences to remain invested in the tense narrative. He uses lots of slow-moving pans to dictate Cecelia’s physical journey, especially within the opening scene.

He guides us through Cecelia escape, showcasing where she is and where she needs to get to. It encourages us to align ourselves with her immediately and, without even seeing the abuse she is subject to, we are willing her to move quicker and quieter, desperate for her safe escape. This, alongside Benjamin Wallfisch’s string-heavy, intense score, is a masterclass in suspense and tension.

Elizabeth Moss is a force of nature. Her dramatic delivery is already renowned in film and television, with her raw performance in The Handmaid’s Tale showing audiences the full extent of her talent. Her performance in The Invisible Man is just as impressive. Whether it is her ferocity and total devastation, her terror or her overwhelming determination to survive, she drives the narrative forward with urging tension.

As a piece of cinema, The Invisible Man is perfectly enjoyable and suitably tense. However, there is the moral and ethical issue of using a subject as serious as domestic violence as a narrative tool. This feels particularly poignant as it is the thriller genre, where the aim is to do just that; thrill and excite.

However, Whannell flips the narrative focus in this adaptation and it allows us to feel, less emotionally manipulated by the subject matter, and more able to see the true devastation of domestic abuse.

Instead of being from the villain’s point of view, like so many other versions of the classic character, we see life from Cecelia’s perspective, and it allows us to enjoy the thrilling aspects of the film but remain very much in her corner; desperate for her survival and Adrian’s demise.

The Invisible Man’s cowardly abuser is frightening but the true terror within this thriller is the stark reminder of how easily women are ignored or deemed hysterical. What’s truly scary is how quickly Cecelia’s sanity is questioned and how domestic abuse can leave lives to ruins; making for an intense and sobering watch.