THE APOLOGIST: IN DEFENCE OF REINDEER GAMES 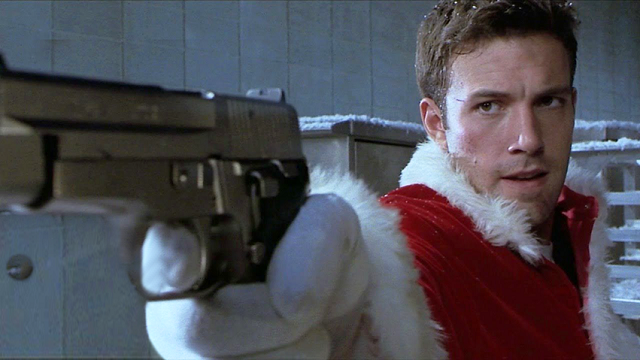 It happens every Christmas… the great debate about what the best Christmas movie is. Twitter is dominated by pro-Love Actually-ers vs the anti-, people claiming Die Hard is the greatest Christmas movie ever made and the traditional pre-Christmas raves about Gremlins or the collected works of Shane Black.

Yet there’s one film that rarely comes up… a much-maligned Christmas film that is only now starting to get the reputation it deserves, as a solid, entertaining Christmas flick. It’s a film that’s been shat upon by the general public, the critical community and even some of the people who were in it.

But to me, it’s the perfect Christmas film.

As anyone who has followed my Twitter account for more than 12 months will now, December is the time of the year where I launch into a full-throated defence of John Frankenheimer’s Reindeer Games… a film that, for better or worse, is funnier than Christmas Vacation, more logic-defying than Die Hard 2 and features more ridiculously silly haircuts than Richard Donner’s Scrooged. Well, it’s really only one ridiculous haircut. But it is very, very ridiculous.

To many, Reindeer Games isn’t a movie -it’s a punchline… like Ishtar or The Adventures of Pluto Nash (I’ll defend Ishtar to my dying day too… but that’s another story). Charlize Theron reportedly said it was the worst thing she’d ever been involved with. And from the star of Aeon Flux, The Astronaut’s Wife and The Curse of the Jade Scorpion, that’s a pretty serious accusation.

But as far as I’m concerned, it deserves a place at the table with such greats as Die Hard, Gremlins and Bad Santa.

First off, it’s important to head into this film in the right frame of mind. Yes, it’s an action film. But most importantly, it’s a comedy. Whether the filmmakers intended it as such or not is debatable (I’d argue Frankenheimer knew exactly what he was doing), but it is a funny movie.

And I don’t mean funny in a “this is so bad it’s good” kind of way. The action sequences – as you’d expect from Frankenheimer – are solid. It’s funny in the same way that Bruce Campbell strapping a chainsaw to his arm in Evil Dead 2 is funny, the same way that Malkovich holding a gun to a toy bunny’s head in Con Air is funny. It’s gleefully silly… and embraces its own ridiculousness.

The plot is B-movie noir amped up to 11, with more twists and turns than the Beatles’ ‘Long and Winding Road’ (well, the winding bit anyway… movie itself is less than an hour 50). In short, a bunch of crooks have planned the perfect heist – dress up as Santa Clauses (carrying heavy weapons under in their costumes) on Christmas Eve and stick up a casino in the middle of nowhere. Affleck’s a loser ex-con who pretends to be his dead cellmate to seduce Charlize Theron. Problem is, Theron’s brother – an immaculately coiffed Gary Sinise – had been counting on the dead man (who used to work at the casino) to help plan the heist. Soon, Affleck’s in too deep (no-one believes him when he says he’s not really the dead man and was just using his identity to schtupp Charlize) and making things up as he goes along to get away from the larcenous Sinise and crew.

You got all that? Because that’s just the start. It gets waaaaay more convoluted from there.

And that’s why mindset is so important. If you don’t view it as a comedy, you’ll just view it as a bad action movie/thriller. And it’s not bad – it really isn’t. Just the same way that an action hero doing seemingly impossible things while avoiding any form of injury can be hilarious, every plot twist in this film is incredibly funny… the twist-upon-twist-upon-twist-upon-twist mentality of Reindeer Games is just deliriously silly. The more it goes on, and the crazier the reveals get… the funnier the movie is.

Legendary blaxploitation actor, singer and South Park actor Issac Hayes shows up to start a prison riot cos there are monsters in his gelatin (translation: cockroaches in his, and everyone else’s, jello)? Don’t look at it as a really strange way to start a prison riot… bask in the silliness and laugh. Because it’s an incredibly funny moment. Reach a reveal about Charlize Theron’s character (of which there are many)? Don’t go “my god that’s so stupid”, don’t try and apply logic to it (because if you do, you won’t get very far), go with the flow. Sit back, realise it’s not so much designed to surprise as it is to make you laugh and go “dear God, what craziness will they possibly try next?”. And for heaven’s sake, when Ben Affleck – with all the sincerity and conviction of Liam Neeson at the end of Schindler’s List demands a piece of Pecan Pie from his captors, I say cheer as the man gets his Pecan fuckin’ Pie.

Because that’s what this movie is. It’s a thrill ride that doesn’t make a lick of sense, but provides plenty of laughs if you’re willing to go along for the ride.

Because we’re the people who can relate to Ben Affleck’s character. How does he spend most of the film (the vast majority of the holidays)? Stuck in a confined space with a group of people he can’t stand with no hope of escape. He is effectively us miserable sons of bitches forced to make small talk with lecherous Uncle Arthur over bad turkey and cranberry sauce after he’s had a few too many egg nogs.

Further enhancing its reputation as a great anti-holidays movie, the film begins with shots of many, many dead Santa Clauses (a sleigh load of Santas?)… accompanied by a Ben Affleck voiceover telling us that he was “never really one for the holidays”. Yep. That was the moment that sold me – dead Santas and not being one for the holidays. From there on in, everything else was the metaphorical gravy.

Need more convincing? Reindeer Games is a film from the era when directors would hire solid, awesome character actors (‘that guy’ types) to fill out the cast. And here, we have some wonderful character actor work from some great people (and no, I’m not talking about the uncredited appearance from Mr Ashton Kutcher… although I maintain it’s still his best work to date). While on paper, Reindeer Games is the Affleck and Theron show, the real limelight belongs to the supporting cast. Gary Sinise not only has wonderfully silly hair and teeth, but he brings us a hefty chunk of Christmas ham, god bless him. It’s a good thing, Sinise brought the ham, because that leaves the other scenery chewers to devour it… and here Sinise is ably supported by the aforementioned Isaac Hayes’ cockroach-fearing prison inmate, Danny Trejo and Donal Logue as a couple of eccentric crooks and the always-awesome Dennis Farina – a man who has made an art form of swearing and is just a marvel to behold whenever he shows up on screen.

Some will have their Christmas Vacation, others will have their Die Hard and some will always take the works of Shane Black or spend Christmas with Gizmo and the Peltzers. But for me, it’ll always be Ben Affleck, monsters in the gelatine, some Pecan fuckin Pie and my goddamned hot chocolate… all the while sipping booze from a water pistol.

Viva Good Ol’ Saint Nick and his many Reindeer Games.

The Apologist will return…

The Apologist: In Defence of Alien Resurrection

Does Alien Resurrection have any redeeming features? The Apologist investigates

The Apologist: In defence of Prometheus

Anotherfilmnerd stands up for the much-maligned prequel, before getting crushed by a stampeding herd of angry ‘Alien’ fans cos he couldn’t run sideways or diagonally.

Well this looks dark. Literally, there isn’t a single shot of daylight in this trailer.