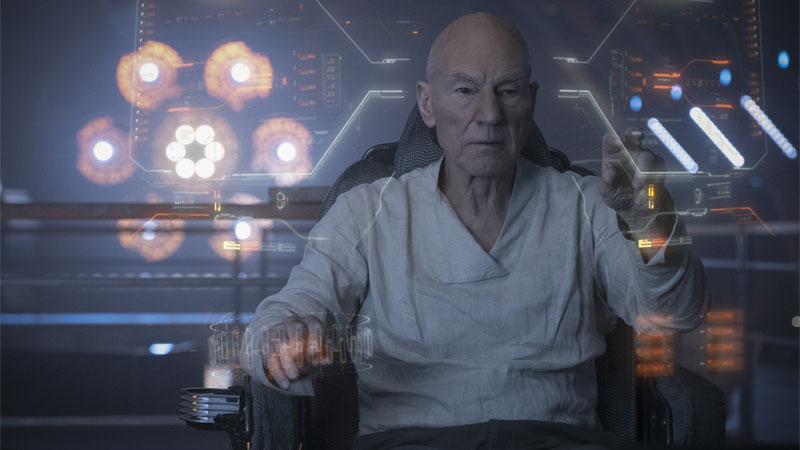 What is Star Trek: Picard? It’s hard to say. Sure, it’s a mini series about Admiral Jean-Luc Picard (retired) as he sets off on a new adventure following his enforced retirement. We were promised a character drama; instead what we got was a whole load of plot. But what was it actually about?

It certainly asked some good questions. What’s the galaxy like following a monumental natural disaster? How do people respond to those who are different after some of their number commit a heinous crime? Do we show mercy to our enemies in their hour of need? How do you carry on living when the institutions you rely on have failed you? And ultimately – what does it mean to be human? These are all a laudable ideas, worthy of Star Trek. Unfortunately the execution leaves more than a little to be desired.

While this show is based on Star Trek: The Next Generation, it never really feels like the same world. We see a return of poverty, of class, a scarcity of resources, a lack of compassion. Conflict is drama and a generation of Star Trek writers in the 90s suffered because their characters always had to be the good guys. It’s hard. But it’s because it was hard that they used their imaginations to tell new stories about a brighter future for humanity. It stood apart.

Picard doesn’t feel like Star Trek. It feels very generic (it was always a genre but bear with me). There are elements of Blade Runner and every other dystopian future it influenced, ideas about artificial life from Battlestar Galactica and WestWorld alongside prophecies of the end of days inspired by AI like in Terminator and a big action ending straight out of Marvel’s The Avengers. It feels like a lot of things but it never feels like Star Trek.

Which is weird as well because it’s doing a fair number of cover versions of things we’ve seen before with evil twins, unknown relatives of Data’s creator, an android bonding with a child. There are even story beats and moments involving a threatening AI that feel like they’re taken directly from Picard’s sister show Star Trek: Discovery and curing death like they did in Star Trek Into Darkness.  These are all things in Star Trek’s DNA but somehow this show doesn’t feel like it’s related. It’s dark and everyone is sad and miserable. It’s like some kind of weird cuckoo child living in Star Trek’s nest.

But the producers want us to know this is Star Trek with many returning characters beyond Picard himself. Seven of Nine is back! Yay. Oh, she’s a hollow, murderous husk who has nothing to live for. Icheb – well that’s a surprise! OH MY GOD, WHAT ARE YOU DOING TO HIM? Oh, it’s Hugh from a couple of episodes of The Next Generation, this is interesting set-up. Oh, he’s dead. It feels more like an expanded universe novel where elements connect to characters and things we already know just as fan service without any understanding of what made them matter in the first place.

Dialogue has never exactly been Star Trek’s strongest suit but here it is execrable, and it mostly feels far too contemporary. Would Picard ever have said ‘ass-deep in Romulans’ (even if he was quoting Riker)?  And far too often people just dump information. Even simple stuff like establishing relationships feels incredibly forced with someone repeatedly saying ‘brother’ or ‘auntie’ to establish familial relationships. I’d rather be confused for a few minutes than have something slapped in my face. This show also contains the strangest use of swearing I’ve ever seen in television – it’s worse than Torchwood. It’s like every time someone say ‘fuck’ they give themselves a pat of the back for being daring. Only once in the 10-episode run does it feel particularly motivated. Whether swearing should be in Star Trek is a debate for another day but I do know I was glad it was something I could watch as a child with my parents when I was young. Even if it’s never been made for children, they came to own Star Trek. With its mxiture of R-rated content and bringing back old friends, who exactly is this show for?

Why wouldn’t Romulans have their own swear words? Sure, cultures are always based on elements of our culture but up until now, each race has felt distinct, here they feel somewhat generic. And that is certainly true of the main villains of the show, incestuous Romulan brother and sister secret agents Narek and Narissa who just feel like evil cardboard cutouts

Their motivation is made clear, they’re part of a religious sect who believes in the warnings and ancient myths which warm of death brought about by artificial intelligence but it never feels good enough. Their devotion comes from a magic circle which shows them a vision of destruction. That could be cool but visually when we actually see it, it mostly just makes you shrug. I like watching videos of decomposing foxes as much as the next man, but it felt like there might have been a better way to visually convey the end of all things.

And the storytelling overall feels odd. It’s a big plot based show but it feels spread far too thin. It’s like there’s enough there for a two-hour movie but it’s been forced into a five-hour miniseries and then padded out to reach 10 episodes. We spend half our time on a Borg cube and all the plot strands set up there are abandoned, they are inconsequential. That might be fine in something more episodic, but we’re supposed to believe the show is all building towards something, that these strands are worth our investment.

And the pacing is a huge problem. It’s the third episode before we meet many of our series regulars and the mission begins, then the fourth episode is more set-up and so we’re halfway through and our cast don’t have any kind of dynamic as a whole which makes it harder for the audience to invest in their relationships. Too much happens off screen with characters just stating relevant facts after learning it somewhere. There are some really good character moments but everything stops for them. You need the action, character and plot to be woven together.  And although we’re apparently in a hurry to reach our destination and save the day, it feels like the show takes a number of diversions along the way and then the ending feels oddly rushed.

There’s also something of a tonal problem. An episode will begin with some absolutely brutal violence and then turn into a comedy heist episode. There’s nothing wrong with the show a show veering from intense plot-driven drama, to light relief but given the weekly release, it would actually have felt far more natural to keep each episode more distinct in tone. Where a show in more contained, as with the seventh episode, ‘Nepenthe’, everything feels far more coherent.

The cast are genuinely very good with Santiago Cabrera’s Captain Rios and Alison Pill’s Doctor Jurati being the stand outs. And however off the pacing is, all the characters do go through arcs. Rios goes from not trusting to investing in a cause; Jurati starts out lost and finds confidence; Raffi begins as an addict and ends up a matriarch; Seven uses murder to realise murder is wrong; and Picard himself comes to realise that life is worth living no matter how old and dying you are. It’s just that you’re never really sure where their transformational moments happened.

But for the first time in a long time, I’ve made this appointment TV. I have wanted to know what happens next. But I find myself viewing it with the eye of a jaded fan and picking at the worst of it.

Because there are plenty of flaws to find. They have deconstructed the happy, utopian vision of Star Trek: The Next Generation and then at the end, it’s supposed to be fixed. If you ask big questions about the Romulan conspiracy, you don’t find good answers in the show itself. It’s frustrating because there are good ideas buried in there, but the show itself doesn’t seem to know what to say about them. The events don’t feel so much like allegories, more just parallels with no lesson to be learned. It all just lacks weight.

The conclusion is an emotional moment with an old man asking someone not to be afraid. If that’s what they wanted to get to, that’s fine but the emotional journey is just as important as the destination. No emotion feels earned, no plot strand feels organic.

So what was it all about? Well, if you go by the finale, it seems like it was about Picard moving on from Data’s death and we get a fascinating coda to Star Trek: Nemesis. That was there in the pilot and it was there at the end but the rest was a tall tale, spun out too long by a drunk man in the pub. There is a note of optimism at the end but that feels like a very similar situation to the final episode of season 1 of Star Trek: Discovery. I want to believe in Star Trek. Next time, give me something to believe in.

If you want to hear more about our opinions on Star Trek: Picard, listen to our podcast here.