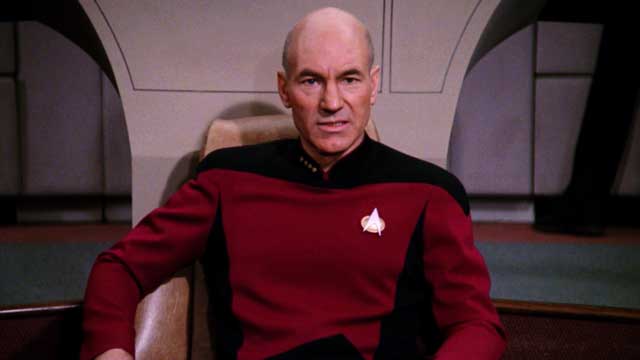 Jean-Luc Picard is one of the best characters to have graced our television screens. What a brave choice it was to make back in 1987 with the conception of Star Trek: The Next Generation – not to make the captain of the Starship Enterprise an action hero, but a diplomat. Not an all-American hunk but an older French(English)man. A highly intelligent individual who isn’t a friend to his crew, but a leader who keeps them on their toes with his unpredictability to help them reach their potential. And the performance by Patrick Stewart elevates it all. He has a quiet authority, a dignity and strength that’s visible in every word he says. And for seven seasons of TV, we saw this man as he commanded his ship, dealt with loss, went on holiday, lost his identity, negotiated peace and ultimately saw his crew blossom into the finest officers in all of Starfleet.

On television, the show ended with all as it should be, the crew heading off on another adventure, knowing there was another strange new world just around the corner. That’s the right way to end – knowing that he’s out there somewhere in space and he’s Captain of the Enterprise. ‘All Good Things…’ was a wonderful episode and the right way to end the adventures of that cast and crew. It reflected on the past and gave us a glimpse into a possible future. It is a perfect ending. But sometimes all good things do not come to an end. They keep going on the big screen.

In the films Picard got sad, wanted revenge, rebelled and then looked bored as he drove around in a dune buggy, and you can argue those extra missions on the Enterprise didn’t really add anything to the Picard legacy, especially as so often it seemed he was out of character to meet the demands of being big screen leading man.

And now he’s coming back in a new show announced at the Star Trek Las Vegas 2018 convention where Patrick Stewart put in a surprise appearance. The form or length of show has not been announced, nor have any other cast members, but I’m conflicted on this comeback. Star Trek: Nemesis in 2002 was not a fitting ending for the crew. It’s a weak, dark, nasty film where everyone looks sad, old and tired. But with so much time passed, should you ever really go back?

Executive Producer Alex Kurtzman and @SirPatStew surprised fans today at #STLV with news that he will be returning to the iconic role of Jean-Luc Picard for a new Star Trek series coming to @cbsallaccess. pic.twitter.com/8F0EPnQMXn

Of course, in today’s revival culture seeing the faces from your childhood back in action has become increasingly common – let’s call it the Indiana Jones phenomenon. And while Kingdom of the Crystal Skull was just another adventure for Indie, seeing the dashing hero that you always wanted to be as a grumpy old man detracts from the escapist romance. That’s part of the beauty of films. You can keep going back and see your heroes being forever young, unaffected by the ravages of time.

Of course, it doesn’t have to be an old man doing exactly the same things he used to with the odd ironic comment. In fact, the two options for reviving your hero are neatly portrayed in the recent Star Wars films – either keep them doing exactly what they were doing before (like Indie) or challenge the audience with a changed character. You can’t really argue that there wasn’t pleasure seeing Han Solo in a cool jacket, being all charming and flying the Millennium Falcon with Chewbacca at his side in The Force Awakens.

Conversely, Luke Skywalker was a much changed man when encountered in The Last Jedi. This divided the fans, often unreasonably, because he didn’t live up to their expectation – he was no longer the hero they expected him to be. And just as with Luke, the expectations for a Picard revival will be insane.

And while that’s not an argument for giving fans exactly what they want, it is one for leaving things alone. It’s understandable when people feel disappointment after decades of investment and imagination. But both of those Star Wars characters, despite their different natures, were revived for one reason – closure.

Solo’s appearance in The Force Awakens provided an emotional heart to the movie and his death was a shocking and powerful moment. But it was an ending. Similarly, Luke made a sacrifice, and passed the mantle over to the next generation. Their deaths were an inevitable part of their resurrection, and I’m not sure I want that for Picard.

After all, one great Star Trek captain was brought back for one last ride after being given the perfect farewell as he sailed off into the sunset. Captain Kirk’s appearance in Star Trek Generations, the first TNG movie, was seen as the right way to pass the baton and was a great marketing ploy. But he no longer fitted into that world and was killed, not in his greatest battle, but fighting an another old man on a bridge. Now if you like, you could argue it’s a perfect metaphor for a hero’s death – it doesn’t happen at the most important moment but in a more meaningless way, but I’m not buying it.

And then there’s Patrick Stewart other career -defining pop culture role – Professor X. The brutal and powerful performance in the X-Men film Logan can’t have escaped the attention of Star Trek’s producers. It’s essentially a deathbed film, bringing the end of an era to a particular set of characters.

If that’s their idea for a Picard vehicle then that would be the most depressing thing in the world. Because while the appeal of one last mission might be tempting, we don’t need that coda, and it will never satisfy, only sadden. We’ve seen that story before. And it isn’t Star Trek. It should be about moving forward and progressing and hope for the future. Death is not something that is dwelt upon in that future but a fact of life and if we’re going to revisit characters we should celebrate what’s great about them as they live and enjoy the optimism that is inherent in Star Trek.

The personnel involved in the new show are not any of the writing team from Picard’s original run. That can be a good thing. The writers on the show provided him with some outstanding material to work with. In Nemesis, the only TNG film with an outsider writing, they failed to capture the essence of the character, perhaps proving the challenges of the form. But Star Trek shouldn’t live in the past, it should extrapolate a future from the present and comment on our times through smart science fiction. So new blood and new stories are vital. But franchise-owner Alex Kurtzman has proven with Discovery that he likes to delve into the existing and bring back what we already know albeit with a new twist.

The best we can hope for is a third way – not simply a revival of Star Trek: The Next Generation or a doomed mission to conclude a story, but something completely new featuring Picard. Let it be a spin-off with Picard at the centre but with new characters, new world and a new ship. Basically, let’s just make some Star Trek.

It is an unexpected but delightful surprise to find myself excited and invigorated to be returning to Jean-Luc Picard and to explore new dimensions within him. Read my full statement in the photo. #StarTrek @cbsallaccess Photo: @shervinfoto pic.twitter.com/8Ynuj3RBNm

For more thoughts on Star Trek: The Next Generation, listen to our podcast – First Contact.

10 things we learned from season 2 of The Next Generation

First Contact now having reached the end of season 2. it’s a great time to look back at some of the important lessons that we have learned. Strap yourself in for some earth shattering revelations from the TNG universe.

We reach a controversial chapter in the history of Star Trek: The Next Generation