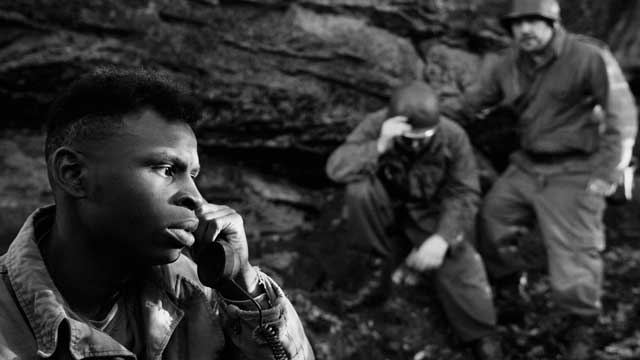 You can’t accuse writer/director Johnny Herbin of lacking ambition. With the script for Mountain he gave himself the challenge of a period setting, no dialogue, a cast of three, a outdoor shoot and an expansive time period. Try pulling that off in under seven minutes.

And the thing is, he does. While it’s clearly been made on limited resources, this is proper visual filmmaking utilising every trick to make the canvas feel expansive, whether that’s through the use of drone footage, strategic placement of extras, a rich soundscape or keeping the details just on the edge of the frame. The stark monochrome is stunning and evokes the brutality and humanity of the best war photo journalism.

And like that art form, much of the imagery on display is powerful and shocking. The film shows you exactly what you need to see to understand the true horror of what’s being portrayed. Mountain is visually stunning. Every shot lit to perfection by director of photography Darren Eggenschwiler and any still could be a beautifully composed photograph.

While the technical details are impressive, the film wouldn’t be anything without strong performances from the cast of three actors. Leading man Wam Siluka Jr. does a convincing job of growing desperation as well as a sense of camaraderie between the three brothers in arms.

Use of voice over is always a risk. Many filmmakers might use it as a stylised embellishment that serves little purpose other than showing off. Here, the disconnect between the voice and visuals helps create a sense of the passage of time and the delivery adds lyrical quality complement the visual style, making the film something close to a tone poem.

Setting a short film over a prolonged period is a challenging trick to pull off and while you never quite get the full sense of the lives of the protagonists, you get enough snapshots to understand it was about survival. And it works because the film is about something. It’s an exploration of man’s relationship with nature – a thesis set out in the opening shot. The mountain of the title is important. It’s a sanctuary and a provider, but it’s untroubled by the plights of humanity and remains unchanged by time.

See it on the big screen if you can.