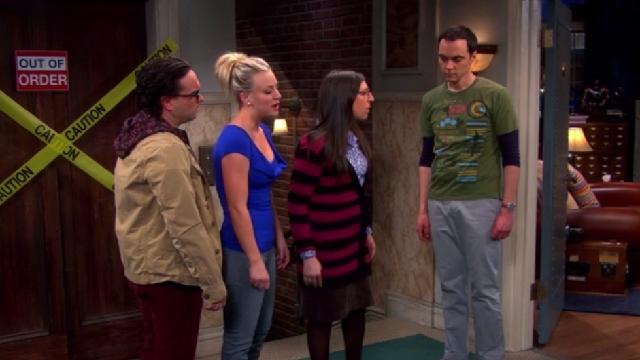 RECAP: Sheldon and Leonard have a fight with Leonard deciding he’s had enough and so  he decides to move in with Penny. With a space in the apartment, Amy suggests that she move in. However neither Sheldon or Penny are happy with the new arrangements. Meanwhile in B-plot land, Bernadette and Howard go to Vegas leaving Raj to spend some quality time with Mrs Walowitz.

REVIEW:  Changing the roommate dynamic can bring out new aspects of relationships and certainly opens up a number of storytelling possibilities, it’s just a shame that this all seems rather forced and will have zero impact overall.

There’s just too much of a feeling that we’ve seem most of this before. Sheldon and Leonard have had fights before and most of them with more substance than one over spoilers that surely any geek would have heard regardless of reading Harry Potter. It’s a fight that seems to escalate without much real reason and Sheldon is just being Sheldon. You could argue that Leonard has finally been broken after years of abuse but the dynamic between these two has more recently been fairly cordial with each giving the other some ground. Here it looks appears Leonard is being unreasonably angry. This would be fine there was some proper justification for his anger but the incident that provokes such a big move is minor.

There’s also a familiar feeling with Penny’s reluctance for Leonard to move in. It’s a pretty well established fact that she wants to move slow with Leonard and his assumption that he can just move in makes it clear that he is carrying the stupid ball this week.

Much more interesting is the Amy/Sheldon relationship. Logically there is no reason he shouldn’t want her to move in but it’s good to see him revealing his less rational and ultimately more stereotypical male side with his reluctance to let Amy closer to him. Miyam Bialik’s continued evolution of Amy and her glee at her opportunity to move in with her love is a great performance and a joy to watch.

In other forced plot news, Bernadette and Howard go to Vegas as part of her work bonus and then have nothing to do for the episode. This is all so Howard can get Raj to visit his mother who then traps him there with food and guilt. It’s not a bad idea but in a supposedly geek literate show they could have made some allusions to The Prisoner and made a much bigger joke of the whole situation.

Overall this episode is not terrible but it all feels a little tired. It would have been better if the actions had consequences and the dynamics had been shaken up a little. The current set-up can only last so long and on the evidence this week, the writing team is running low on ideas.

Instant Reaction Review: Doctor Who – The Rings of Akhaten

What does the new season hold for Nick and Jess?