REVIEWED: HOW I MET YOUR MOTHER SEASON 8 EPISODE 16 BAD CRAZY 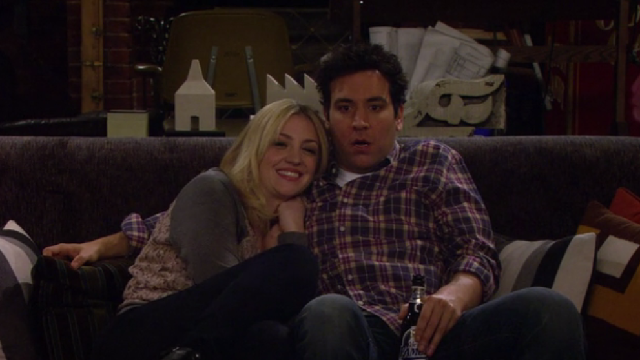 RECAP: After a bad breakup Ted’s crazy girlfriend Jeanette locks herself in his room and tries to destroy all his stuff. Meanwhile Robin is terrified when she gets left alone with baby Marvin leading to a series of calamities.

REVIEW: Okay, first things first: Mike Tyson is the guest star. That’s former heavyweight champion and convicted rapist Mike Tyson. Is everyone okay with this? One cameo in a hit comedy blockbuster and it seems everything is forgiven.

The B plot revolves around Robin and her fear of baby Marvin and when she’s eventually left alone with him, she makes a series of bad choices which ends up with her leaving the baby alone with Mike Tyson in a strip club. Is that the joke? That a rapist is left holding a baby in a sexual environment? If so that’s uncomfortable.

The mechanism of the joke is reasonably clever and uses the show’s flashforwards in to good effect with Robin confessing a small part of the story to Lily at various intervals as Marvin grows up. This continuing conversation with Lily getting increasingly exacerbated even though years have passed is nicely self aware. Shame about the whole Mike Tyson thing.

The writers have finally addressed the apparent paradox of Ted. While he’s always claimed to want to settle down and get married, he’s really lived as hedonistic a lifestyle as Barney, albeit without all the games. In this episode he finally admits that he was having a good time being a single man in New York. Well good for him but do you really have to tell your kids every detail about it? (Not an original thought I know but the montage of all the women Ted has slept with made it seem pretty apt)

So anyway, Ted tries to break up with Jeanette which leads to her going crazy and smashing all her stuff. Ah, the bitches be crazy. Not really. What we learn in this episode is an important lesson about sexism from Mike Tyson. I know! Maybe women only act crazy because men don’t communicate with them properly and give mixed signals. So it turns out every time Ted tries to dump Jeanette he actually sleeps with her and then ignores her. What a guy!

In the end Lily advises Ted to stay with this girl because although she’s crazy, so is Ted at the moment and his friends will all be there to pick up the pieces when it all goes up in flames. How sweet.

FINISHING LINE IS IN SITE: Old Ted mentions to his kids that Jeanette is his last girlfriend before meeting their mother. It’s a relief to hear that but she seems like a pretty pointless obstacle. Did Victoria have to be ruined so early in the season?

ARE YOU A COP: Turns out Jeanette is a Cop which lets Marshall and Ted play at being in The Departed once again.

TIME JUMPS: It all goes up in flames at Ted and Jeanette’s real break up when it seems she’s set fire to his apartment as the gang sit outside.  This is presumably before the wedding on May 25th although with a season 9 confirmed perhaps time is going to get stretched.

How I Met Your Mother Season 8 airs on CBS on Mondays in the US and on Thursday on E4 in the UK.

It’s the series finale of How I Met Your Mother

TV Review: How I Met Your Mother Season 8 Episode 21