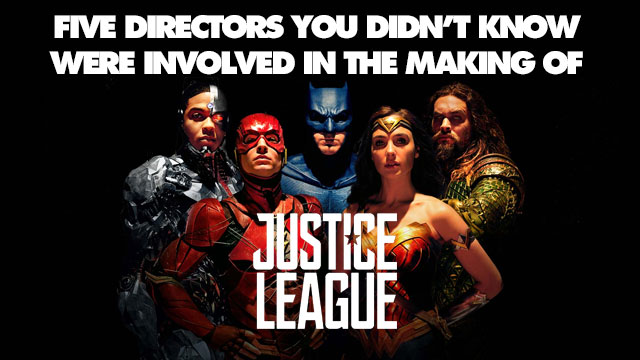 Ever since Joss Snyder’s magnum opus Justice League was unleashed on cinemas, there has been considerable debate about which of the two directors was responsible for what, the level of studio management (or mismanagement) of the overall DC franchise, and film’s bizarre tonal shifts.

And while many of the misguided leaps from comedy to drama have been traced back to the involvement of two wildly different writer/directors (Joss Whedon, of course, is best known for his witty banter and peppy heroes while Zack Snyder is world-renowned for delivering much-needed CGI enhancement to Gerard Butler’s pecs), it’s clear most pundits, reviewers and bloggers have no idea of the full extent of studio meddling involved in Justice League.

But how many people realised that Zack Snyder originally envisioned Justice League as a tribute to one of his all-time favourite movies: Anchorman: The Legend of Ron Burgundy? (If you watch the film knowing Cyborg is a proxy for Brick Tamland, you’ll be amazed at how clear this tribute is).

In fact, Snyder loved Anchorman so much that he followed in director Adam McKay’s footsteps to the point that he shot enough footage for two films and planned to include the second (a melancholy tale of vigilantes, mistaken identity, sushi and Gotham City’s first ever Starbucks entitled Smell the coffee, Bruce Wayne!) as a special feature on the Blu-ray.

And, as fascinating as that particular anecdote is, it’s a mere footnote in the far greater tale of the wild, troubled production behind what Warner Bros hoped would be its answer to The Avengers when, instead, it would be more like Warner Bros’ answer to “The Avengers”.

Now, for the first time, The Spoilist can reveal to you the smorgasbord of cinematic talent that had a hand in the recutting, retooling and rewriting of the most controversial DC superhero film since the last one (there are so many that fit this description. Just choose your favourite contender and roll with it).

Early in the rewrite process, it became apparent to executives that there was a yawning chasm between Joss Whedon’s witty banter and Zack Synder’s *polite cough*  bleaker view of the world.

Hoping to bridge this gap, Warners enlisted the help  Jay Roach, who had previously handled both comedy (Meet the Parents) and drama (Recount) with aplomb.

Instead, he wanted to stamp his own footprint on the DC Universe, by extending the franchise to include one of his best known films.

Roach’s pitch would have seen the creation of the DCFU (the DC-Focker Universe). In Roach’s ambitious plan, Justice League would reveal that Bruce Wayne’s mother, Martha, was none other than Teri Polo’s character from the Fockers movies – Pamela Martha Focker.

Roach tried to argue that this would add an intriguing new backstory to the much told tale of Bruce Wayne’s murdered parents. He also teased the chance to “pull another Martha” – as Bruce’s mother would now have an entirely new first name to find a common bond with either friend and foe (while no names were mentioned, it’s clear Roach was pulling for a Batman/Poison Ivy romance).

And while Warners eventually canned the concept, if you look closely enough, you can still see hints in the finished product that there’s more to Bruce Wayne’s parentage than met the eye.

While Warners loved some elements of Schumacher’s pitch – primarily a costume design that would’ve seen comically oversized codpieces for every member of the Justice League (including Wonder Woman) – others proved too much.

The dealbreaker was Schumacher’s plan to make every line of Aquaman’s dialogue feature a fish pun.

Needless to say, the buoys and gills of WB weren’t hooked by Schumacher’s plan – although, much like Roach, elements of Schumacher’s pitch found their way into the finished product. While the fish puns are gone, the setups remain.

Listen carefully to Jason Momoa’s dialogue and try rewriting each line with the word “sturgeon”. Your mind will be blown.

Of all the directors who weren’t Joss Whedon, Gus van Sant had the vision that most appealed to Warners.

His pitch? A scene-for-scene remake of The Avengers, but with the names and location changed so that it could fit in the DC Universe.

The studio was prepared to overlook the clear narrative problems this would create (The Flash and Steppenwolf were suddenly brothers for no apparent reason, Jim Gordon was killed off for no apparent reason and Cyborg was suddenly a soldier who fought Nazis in World War II), thinking that they would be guaranteed the same financial success as The Avengers. After all, they were making exactly the same movie – just with different actors.

The ‘it’s so crazy it might just work’ plan all came unglued when an unusually smart copyright lawyer pointed out that there may be legal problems.

Execs flipped over Jackson’s pitch – the one movie, rewritten so it could span ten parts. They were even ready to wear a three-and-a-half hour running time for each instalment.

Unfortunately, Peter Jackson refused to budge on one key element.

Not only did he insist on having all the sets rebuilt in New Zealand for the shoot, he demanded Warner Bros actually rebuild the entire studio lot in Auckland, so they could recreate an authentic environment of working on the actual lot where most of the original footage was filmed.

Warners – known for its simple, exacting style – felt this was too complicated, and politely declined.

Fed up by the constant bickering between Joss Whedon and Warners execs, character actor Willem Dafoe came up with a bold plan to salvage what he felt was turning into an unmitigated disaster. Hire an uncompromising director, renowned for his exacting perfectionism, and show that Warners not only wanted to make a franchise, they wanted to make *art*.

Dafoe’s suggestion? Director Lars von Trier. The Danish director and Dafoe had formed a bond on the set of Manderlay over their mutual distrust of Lauren Bacall, and had been close ever since.

Such was the nature of their friendship, Dafoe had been able to convince von Trier to abandon production on his current film to take on his first, big budget studio franchise.

von Trier’s radical take on the material would have seen a vastly different ending to proceedings – Wonder Woman would have had intense, violent sex with Steppenwolf to help save the human race. In the process, though, she suffered serious injuries resulting in her death in Clark Kent’s arms.