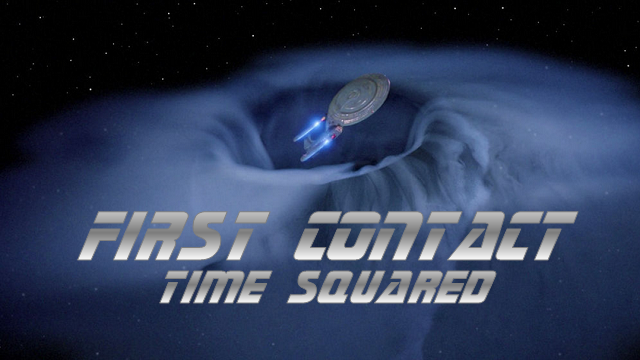 As the title reveals, this is a time travel episode, or at least it appears to be. It might be an anomaly episode too. Really it’s not very clear. The Enterprise finds Picard on a shuttle but it can’t be him because Picard is already on the ship, and actually so is the shuttle. What sorcery is at work here? The other Picard is disorientated and unable to shed any light on the situation but an investigation discovers that this Picard travelled back through time by just six hours and the shuttle’s logs reveal that the Enterprise is set to be destroyed. Can the crew escape their fate? Or are they already doomed? Or actually will some weird thing happen that makes no sense in order to end the episode?

‘Time Squared’ leads Andrew, James and Alex down a variety of conversational avenues as they discuss what makes a mystery episode work, the nature of puns and why Riker doesn’t know how to make an omelette.

Listen to the previous episode, ‘The Royale’ here

The time has come for Worf to get a back story

After his brother plays a practical joke that goes wrong, a child called Willie is left fighting for his life on the Enterprise. Meanwhile Data goes bonkers and steals the ship

In a metaphor for the BBC in the 1970s one of the senior crew starts using the radio to start talking to an inappropriately young girl, and forms a special bond.