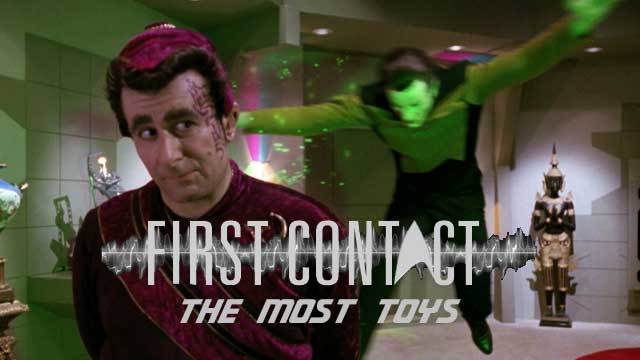 Data is transporting a dangerous chemical required to prevent an environmental disaster on the planet of the week, when his shuttle explodes, apparently killing him. Everyone on the ship is a little shocked but they get on with their mission like good Federation officers do. In reality, Data has been kidnapped and his death faked by Kivas Fajo, a collector of rare artefacts lacking in moral fibre. Although Data is keen to escape captivity, Fajo finds various means to persuade Data to do his bidding. Meanwhile the crew realise that their errand of mercy wasn’t a natural disaster after all, so they hunt down Data’s kidnapper for the big final confrontation.

Join Andrew, James and Alex  as they discuss the merits and failings of this season 3 episode.

The Enterprise is exploring an uncharted system when they find a lone survivor of an escape pod crash.

Data records a podcast about a day in his life for Commander Maddox, that guy who tried to have him taken to pieces in The Measure of a Man…

Remember Barclay? He was more entertaining than most of the series regulars so when you come up with a good story, you might as well give it to him.