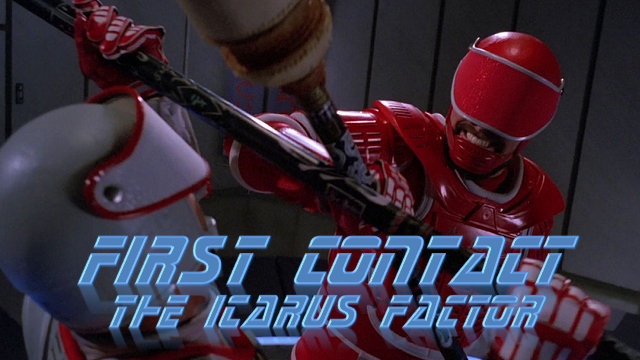 The Icarus Factor is an ITV gameshow hosted by Gordon Burns…..wait that’s not right. It’s an episode of Star Trek The Next Generation. Those are so easy to confuse. In ‘The Icarus Factor’ Riker gets offered a promotion again, and this time it’s personal. Why is it personal? Well, because it’s his father that offers it to send him on a long and tedious voyage charting weird dust clouds in space. In a very exciting b plot Worf celebrates the anniversary of his rite of ascension by getting his friends to eat him with sticks. It’s heart warming stuff. In an even more exciting C plot, there are some anomolies in the readouts in engineering and Geordi can’t explain them. Turns out to e nothing in the end. Alex, Andrew and James all took away something special from this episode, much like the thing Riker takes away from an orgy in a disreputable establishment on Risa.

Picard gets kidnapped by a weird sparkly slab and is replaced by a flawed clone. He finds himself in a room with three others – a Starfleet cadet,  a cowardly alien and an angry alien.

In our first Classic Trailer Tuesday we look at Star Trek: The Motion Picture

Riker is injured while undercover investigating the Malcorians, an alien race on the verge of warp technology.