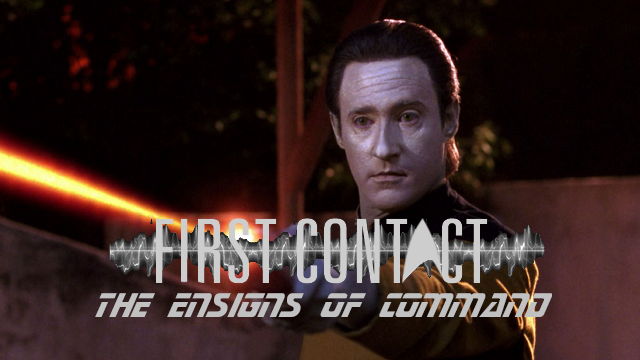 The Sheliak Corporate gets in touch with the Enterprise and they never, ever call so the crew know that something’s up. They want some humans cleared off a planet, that’s belongs to them thanks to a hundred year old treaty. Turns out the humans are the descendants of some colonists who got lost 90 years earlier. Due to the radiation on the planet, only Data can go down and he’s charged with getting the colonists to leave, although they’re mostly reluctant. Meanwhile the Enterprise has to stop the Sheliak wiping out the crew. Both need to be creative to achieve their aims, and you know what, in the end they manage.

Join Andrew, James and Alex for an episode that they actually enjoy for a change as they analyse every detail and wonder what the hell ‘The Ensigns of Command’ even means.

The Enterprise is busy pottering along when it’s diverted on a new mission following an awkwardly chummy encounter with the captain of the Hood.

Someone found an old original series script titled ‘Devil’s Due’ in a box and they changed the names of the characters. Kirk Picard must face off against Ardra, a woman who claims to be

With its depiction of a world of incredible gadgetry, Star Trek has been credited with inspiring countless pieces of technology from the mobile phone to medical scanners. But we don’t like to take the easy route when it comes to making fatuous lists.