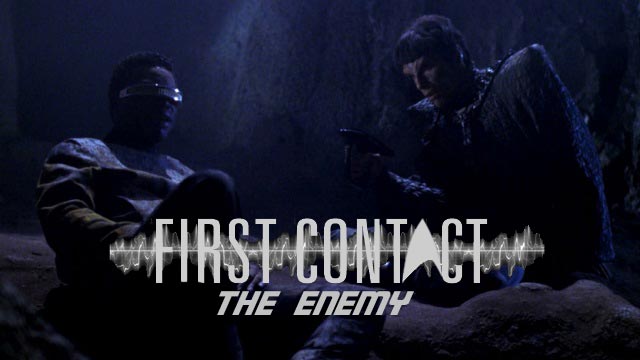 An away team comprising the First Officer, Head of Security and Chief Engineer beam down to an inhospitable planet close to the Neutral Zone to investigate a Romulan distress signal. With poor visibility and heavy interference they can barely see in front of their faces but they don’t operate the buddy system and Geordi wanders off on his own and falls down a hole. Meanwhile Worf and Riker find a badly injured Romulan survivor and take him to the ship and would you believe it, a big Romulan ship is on its way to cause a diplomatic incident. Crusher finds a way to treat him but the only transplant option is Worf and he refuses to help due to the whole Romulans killing his family thing. On the surface Geordi is held captive by another Romulan but ultimately they decide to work together to survive. Everything works out fine in the end but it almost didn’t.

You can watch along with us on iTunes

In this week’s Star Trek: The Next Generation podcast retrospective, Andrew, Alex and James look back at ‘The Bonding’. An Enterprise away team is investigating an apparently uninhabited planet when disaster strikes and a big explosion goes off right in their faces.