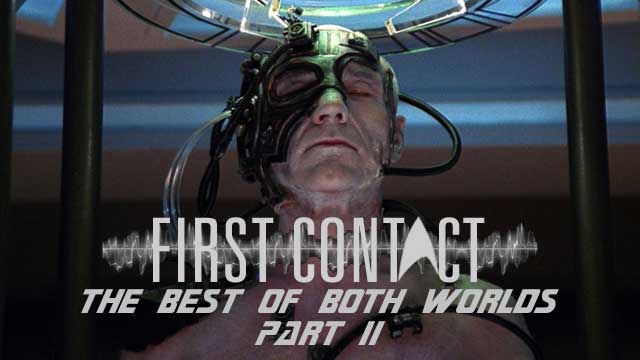 After the Enterprise’s plan to fire a burst from the deflector fails, the Borg set a course for Earth. A fleet of 40 ships engages the cube at Wolf 359 but the Enterprise is unable to join them having burned out the warp core. When they arrive at the site of the battle they find all the ships destroyed but prepare to engage the Borg once again. An audacious series of manoeuvres sees the Enterprise recapture Picard but he remains in the hostile guise of Locutus. While they can’t separate the man from the machine, Data establishes a way to hack the Borg’s collective consciousness, but can he stop them before Earth is destroyed? And can they save Picard? Yes, because this week’s episode is not a cliffhanger.

Alex, James and Andrew spend far too long talking about this slow burning sequel to the greatest Star Trek cliffhanger of all time.

Listen to the previous episode, ‘You Must Remember This – Season 3’, here.

Riker is injured while undercover investigating the Malcorians, an alien race on the verge of warp technology.

The Enterprise is exploring an uncharted system when they find a lone survivor of an escape pod crash.

K’ehleyr is back with news. Worf’s a father to a tiny little Klingon called Alexander…