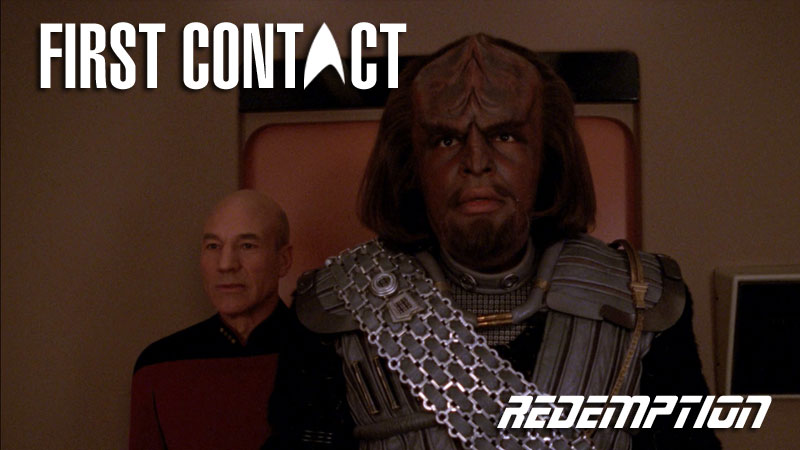 The Enterprise returns to Kronos so Picard can fulfil his duties as arbiter of the high council and install Gowron as Chancellor. The Captain suggests that Worf should take the opportunity to reclaim his family honour. But there is unrest within the Empire with the Duras family led by Lursa and Betor plotting against Gowron having found a new heir to rule. Worf decides to help Gowron win power in an attempt to have his house restored but when he is made Chancellor, many of the high council side with Duras, beginning a civil war. Worf resigns from Starfleet in order to fight alongside Gowron and his brother. Meanwhile Starfleet suspects the Duras family are backed by Romulans and the Enterprise leads a fleet to set up a blockade, apparently not realising that space is huge and three dimensional. Picard is shocked to discover the Romulans are led by Sela the daughter of the alternative Tasha Yar from ‘Yesterday’s Enterprise‘ but no amount of technobabble can make anyone care. The blockade works, Worf’s honour is restored, Data proves himself in battle and Gowron wins the war. Then Worf rejoins the Enterprise and everything is basically fine again.

Listen to the previous episode ‘In Theory’ here.

Q is seeking asylum on the Enterprise having been thrown out of the continuum and stripped of his powers… and his clothes.

Too Short a Season? You’ve got to be kidding

Picard explores the Holodeck for the first time and Andrew, James and Alex can’t believe that it malfunctions. What are the chances?