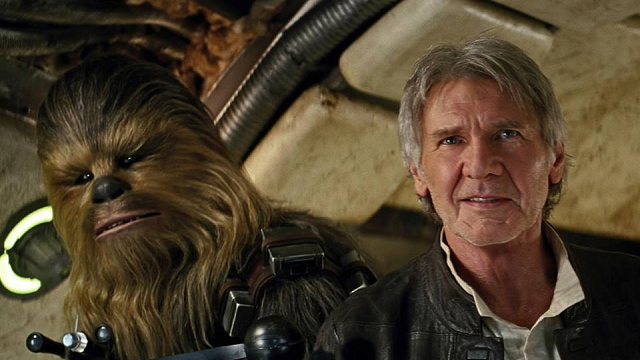 Approximately 30 years have passed since the events of the last chronological episode of the Star Wars saga Return of the Jedi. At the end of that film the evil Galactic Empire had fallen in a climatic battle with the Rebel Alliance, Darth Vader had destroyed his master The Emperor and brought balance to the force. The last time we saw Luke Skywalker and chums, they were dancing around campfires with Ewoks celebrating the fall of the Empire. Lando’s moves were truly a sight to behold. All was well with the galaxy.

When The Force Awakens picks up the saga it soon becomes clear that things haven’t changed that much in the last 30 years. Out of the ashes of the fallen Galactic Empire has risen The First Order, an organisation that is pretty much the Empire in all but name, with upgraded sleeker technology and Stormtroopers, almost as if they took a trip to the Apple store and asked to be upgraded to a new operating system. The Rebel Alliance has formed a new Republic and have rechristened themselves The Resistance. A civil war is still raging across the galaxy, only the names of the two opposing sides has changed.

The film wastes no time in getting into the action, the opening crawl sets up the film very well. There’s no need for clunky expositional dialogue here, it just gets on with it. The first 45 minutes of The Force Awakens are almost flawless. The pacing is perfect and the new characters are introduced with little fuss. It feels really natural and organic. John Boyega & Daisy Ridley are superb here, their characters are people that you enjoy watching and spending time with. Boyega brings a lot of charm to his role as Finn, one moment he is totally out of his depth and the next his cockiness and charm come to the surface.

Ridley gives a strong and feisty performance as Rey, her relationship with Finn is a real highpoint of the film and the two actors are clearly having a great time working together and have genuine chemistry. However, for me, it’s Rey’s relationship with Harrison Ford’s returning scoundrel Han Solo that is a real standout.

Ford is just as good as you’d hope as Han. He may be older but the he’s still the smart-ass we all love and there is much more emotional resonance and complexity with the character. Whenever he is on screen with Carrie Fisher’s General Leia, I felt really emotional. Their chemistry is still there and you can almost feel the history and feelings that exist between them. I had reservations about Carrie Fisher returning to Star Wars as she is such a vibrant personality in real life and hasn’t acted in years but her performance here is good. The relationship between Han & Leia is the real emotional anchor of the film.

Adam Driver gives the best performance of the film as Kylo Ren. The character of the Darth Vader worshipping fanboy is complex, nuanced and brilliant to watch. Kylo Ren is such a contrast to Darth Vader. We are so used to seeing Vader murder his underlings when they fail him that when we see Kylo Ren trash his room like a sulky teenager it underlines the characters’ instability and the fact that he isn’t really in full control of his emotions or power. His lightsaber is almost a statement to that effect, it’s effective and does the job, but looks unpolished and rough around the edges. It is Kylo Ren that provides the film with some of it’s more emotional and dramatic moments and Driver has given Star Wars one of it’s more interesting villains.

I would have liked to see more of Oscar Isaac. His performance as Poe Dameron, the ‘best pilot in The Resistance’ is good but feels slightly underwritten. The character serves it’s purpose in the film but I would have liked to see some more development of the character. The same could be said of Domnhall Gleason’s General Hux. Gleason delivers his lines with real gusto and manages to make some clunky dialogue sound very believable as he sneers his way through the story.

Now to one of the real stars of the film: BB-8. Everyone’s new favourite droid (sorry Artoo) is executed so well by the puppeteers and is so integral to the plot that he just had to work. The sound design of BB-8 is flawless and the personality of the droid shines through. You can tell what BB-8 is feeling and wanting to communicate every time. I loved BB-8 and felt much better about myself forking out money to but the Sphero droid a few months ago as a result.

One criticism I have about the plot of the film is it borrows very heavily from certain aspects from A New Hope, maybe a little too heavily in places. There are certain aspects of the story that are brushed over too quickly and would have benefitted from further explanation. For me though, this was outweighed by the sheer sense of fun in the film. It is really funny in places and has some great lines of dialogue. One particular line spoken between Poe Dameron and Kylo Ren at the start of the film is a standout for me.

Obviously The Force Awakens is part of a new trilogy of films so we are left with unanswered questions that will hopefully be answered in future episodes. I am very interested in finding out more about Andy Serkis’s character Supreme Leader Snoke. This character could well be the new big bad of the Star Wars universe and I hope to see him being fleshed out more in Episode VIII.

The expectation on JJ Abrams was monumental and I’m very happy to say that he has delivered a film that is fun, emotional and feels like Star Wars. For me, The Force Awakens is just as good as Star Wars or Return of the Jedi, maybe not quite as good as The Empire Strikes Back but it puts the prequels to shame. It will be interesting to look back at The Force Awakens in a year or two to see how it still stands as my feelings for the film are still coated in a dusting of nostalgia for the original trilogy but I do feel that right now, this is an excellent sequel and the perfect start to this new era of Star Wars. JJ, you can relax. You did it. The final scene of the film made me cry, it is possibly the best ending to any Star Wars film so far. Job well done Sir.

Hey, you there. Yes, you. Do you like Star Wars? Well, you’re in luck, there’s a new trailer out for Episode VIII…

Reviewed: How I Met Your Mother Season 8 Episode 16

Ted’s got girl problems and Robin is left holding the baby. Yeah, it’s about as funny as it sounds.