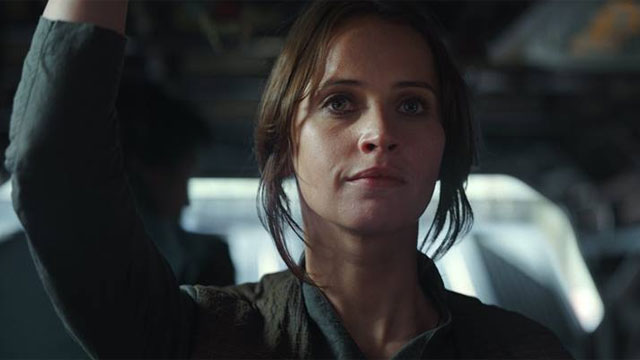 Set just before the events of Star Wars: A New Hope (1977) the Rebel Alliance discover that the Galactic Empire are planning to build a new ‘planet killer’ weapon, the Death Star and set out to retrieve the plans of the new battle station.

After the colossal success of The Force Awakens last year, the first standalone movie in the Star Wars universe had a big act to follow. Rogue One: A Star Wars Story does more than follow up The Force Awakens, in some aspects it surpasses it. Gareth Edwards has created a movie that is different to anything we’ve seen in Star Wars before, yet it still fits perfectly into the stories and universe that occur ‘A Long Time Ago in a Galaxy Far, Far Away’.

This movie portrays the events that lead up to the first Star Wars movie from 1977, telling the story of Jyn Erso (Felicity Jones) and a band of Rebels that team up to steal the plans for the Death Star, a new weapon that the evil Galactic Empire are building that will have the ability to destroy entire planets. So far, so Star Wars. Right?

Wrong. The movie takes some of the conventional tropes of the original Star Wars trilogy and gives them a tweak. When you watch the original movies, it is easy to understand who the good guys and bad guys are. The Rebels are good and the Empire is bad. While this idea still remains, Rogue One adds shades of grey to this, some of the actions undertaken by Rebels fighting for the cause could be considered questionable. This is no longer a simple tale of good vs evil. This is War.

And what a War movie Gareth Edwards and the team at Lucasfilm have brought us.  There are sequences in Rogue One that are violent, action packed and to use a cliché, gritty. This story gives the viewer a real sense of the tyranny of the Empire. A section of the film takes place on the moon of Jedha, which is under Imperial occupation. The scenes on this moon give a real indication of how it must feel to live your life under the watchful eye of the Empire.

The first hour of the film can seem a little haphazard and moves along at a very fast pace as the story begins and we are introduced to the characters. The last half of the film occurs on a Scarif, a tropical like planet which houses an Imperial Military Installation. This hour of the film is simply the best piece of cinema that I have seen for a long time. The action is relentless and even though we know as viewers that the Rebels do successfully steal the plans, the story manages to build real tension as the climax of the film plays out. The battles on the ground are far different to anything we’ve seen before in Star Wars. There is a real sense of battle here, sacrifice and blood, violence and carnage. It really is ‘in the trenches’. This isn’t just rebels and Stormtroopers shooting blasters at one another. Despite this change in tone from what we have seen before, it still feels like Star Wars.

The effects work in Rogue One are phenomenal. The team at ILM have produced effects that are literally jaw dropping, both in terms of effects work in some of the battles that occur, to moments featuring characters that we are already familiar with. If ILM do not win an Oscar for this movie, there is no justice.

The design work is also superb. From lovingly recreated sets that we’ve already seen in A New Hope to the installation on Scarif, the set production and design also tell us that we are in the same old universe, while also giving subtle twists and adding something fresh and new. There are plenty of references that long time Star Wars fans will love picking out in the background, this film will require multiple viewings to spot them all.

The performances are excellent, especially Felicity Jones, Ben Mendelsohn, Donnie Yen and Alan Tudyk. Jones’ Jyn Erso is another strong female protagonist, who has a real emotional connection to the story. Mendelsohn is clearly having a ball playing the slimy Director Krennic, he will be a very memorable villain for a long time to come. Donnie Yen’s Chirrut Imwe is a real delight, a kind of interstellar monk that feels and believes in the Force, yet is not a Jedi. His chemistry with Wen Jiang as Baze Mulbus is wonderful, they could be the best double act in Star Wars since R2D2 and C3PO. The tone of the movie is dark, but Alan Tudyk does provide real moments of humour and lightens the film as K2SO. This lightness of touch is definitely needed here, as the darkness at times can feel like it can threaten to engulf the entire movie.

Finally, to everyone’s favourite Sith Lord, Darth Vader. His screen time is very limited; he appears in only three scenes but this is an advantage as those scenes have a real impact. Any more screen time with Vader could have changed the film into A Darth Vader Story and we’ve already had that. One scene featuring old wheezy had me absolutely stunned. You’ll know it when you see it.

Rogue One: A Star Wars Story is an excellent addition to the Star Wars canon. It adds depth and complexity to the universe without ever forgetting those roots. The action is visceral and the performances are excellent. Gareth Edwards deserves all the success that this surprising instalment of Star Wars will bring.

The Star Wars prequels aren’t all bad you know…seriously

When a film shows on an IMAX screen, that means it gets special posters, just for those showings. Why this is the case, who can say.

Rogue One: A Star Wars Story arrives in theatres 16 December 2016