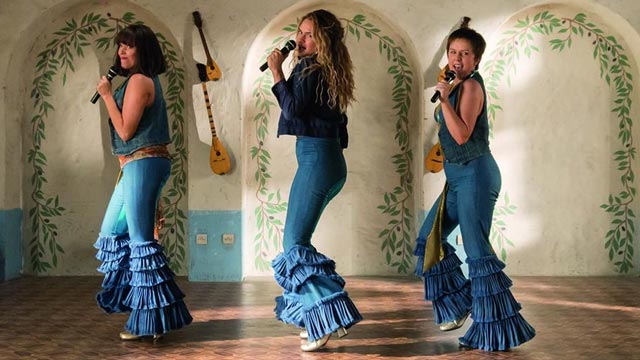 The original Mamma Mia! is many things. It’s a bit of a mess, often terribly sung and just a bit odd. (Seriously, just watch the ‘Money, Money, Money’ sequence and try to explain any of that fantasy boat stuff). But none of that really mattered because it’s pure joy.  The songs are indestructible, the cast are great company and the location is gorgeous. It was fun and somewhere you wanted to be. And somewhere you’d definitely want to revisit.

And so 10 years later, Mamma Mia: Here We Go Again is here to take you back to the Greek island of Kalokairi. You get to spend time with the same people, experience the same story from a different angle, and hear some of the same songs again. This time we explore two timelines. The first takes place five years after the first film with Sophie attempting to fulfil her mother Donna’s dreams by opening a hotel on the island. The other flashes back to 1978 with Donna finishing university and heading out to explore the world looking for something more where she meets Harry, Bill and Sam for the first time.

If you want to write an essay on the difference between story and plot, then you could do worse than compare this film and its predecessor. Essentially, the story told in the original is played out here and it turns out sometimes showing can be harder than telling.

It’s all very well performed. Lily James is amazing as young Donna, nailing her free-spirited attitude and performing pop hits like a pro. It’s fun to see Hugh Skinner do an impression of Colin Firth and hearing Jeremy Irvine attempting Pierce Brosnan’s mid-Atlantic Irish accent is a beautiful thing. And damn, Jessica Keenan Wynn as young Tanya channelling Christine Baranski will give you life. And the costumes – they are beyond glorious.

But in a film full of great moments, nothing really feels motivated. It just feels like it all plays out. In essence, there’s no drama. In a romantic comedy with three leading men, it’s absurd that each of the relationships just pass by without any conflict between any of the leading characters.  But that’s somewhat dictated by the events of the first film, although they have altered a few details anyway so it’s not like any of that should have mattered. In Mamma Mia! each of these men is supposed to be somewhat significant in Donna’s life and remembered 20 years later. Here, none of the relationships feels significant and Harry especially feels like he gets a bit short changed. They’re just people she met on holiday…and happened to get pregnant by one of them. But perhaps that’s the key thing. For the first film to make sense each of these encounters has to take place in an incredibly compressed time span. But it feels like all of it should feel more significant.

And a musical should be able to take big emotions and express them through song. But this is perhaps the definition of a jukebox musical. The songs are there but they don’t necessarily reflect what’s happening on screen or it’s all a bit literal. There’s a scene set at university so ‘When I Kissed the Teacher’ can be performed. And it might just be me but ‘Waterloo; isn’t really a seductive serenade to my ears. Still, you can always call one of your characters Fernando if there’s a lull. It’s not like the first film’s songs were that integrated but they were certainly a bit more natural.

And despite some nice visual transitions, the two eras don’t really gel either. If only there was some kind of motif, I don’t know – say Donna’s diary that could be used to connect the characters in the two eras through some lovely voice over. In the end, the plots do converge, but the crucial development feels a little late like they only realised it was a good idea after most of it had been shot.

The present day scenes are there just so they could put the cast on the poster and  feel so slight like everyone has just turned up for a paycheck and a holiday. Except Brosnan who gives his all once again an genuinely makes ‘SOS’ his own. Everyone is a bit older, wiser and definitely sadder, and that really sets the tone for the film.

As much as anything, it’s a film about loss – lost youth, missed opportunities, and the importance of the being with the people and the places that you knew when you were young. So, who wants to dance? It might just be me, but I didn’t really want to watch Mamma Mia! to consider my existential angst.

It does mean that some of the more downbeat ABBA songs get an airing with classic breakup themes ‘One of Us’ and ‘Knowing Me, Knowing You’ performed to keep spirits close to tearful. The reason these weren’t prominent in the first one is probably because they’re mood killers.

Mamma Mia! Here We Go Again is definitely better directed and more purposely put together than the last one, and features plenty of wonderful moments. And it has Cher in it too just in case you didn’t think there was enough camp. But instead of being the glorious reunion of fun ABBA dancing, the whole film has an air of melancholy. If the first was a big celebratory wedding, this one is a weird family barbecue after a funeral.