FILM REVIEW: GUARDIANS OF THE GALAXY 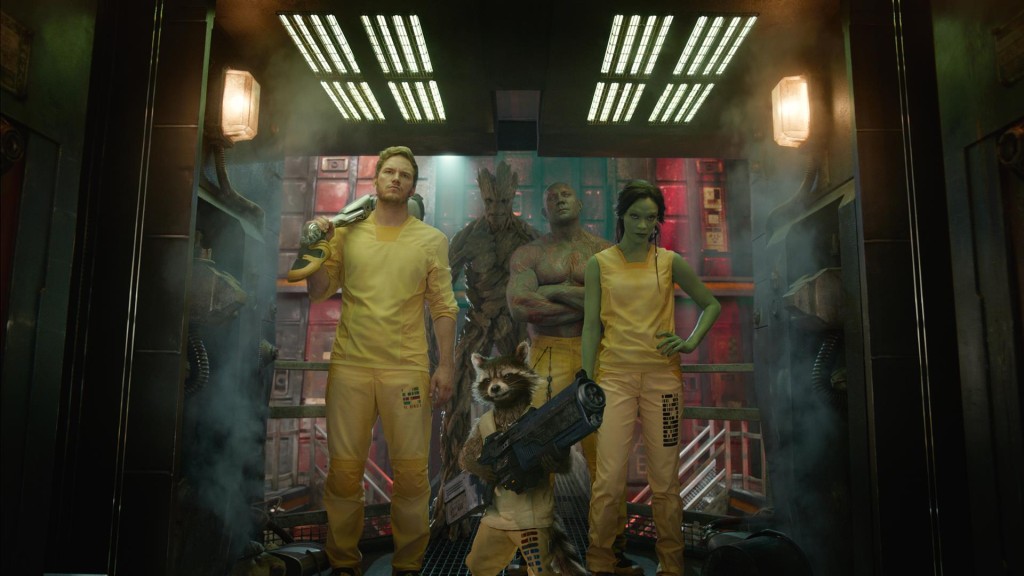 Guardians of the Galaxy is the latest movie from comic book and movie powerhouse Marvel. It tells the story of a wisecracking group of misfit criminals in a distant part of the galaxy who must set-aside their petty differences in order to save the universe from a power-hungry mad man.

Marvel have been extremely canny in the way they have constructed their Cinematic Universe, hereafter referred to as the MCU. They began with Iron Man, keeping it grounded in our world with science enhancing a man with machine parts. The Incredible Hulk and Captain America are both the results of experiments aiming to create a Super Soldier. Thor may be a god from another planet but he’s part of Earth mythology and recognisable beyond comics lore. His adventures opened a gateway to the possibility that other worlds and aliens exist within the MCU. This was exploited in The Avengers with faceless alien bad guys, while still keeping the action very much grounded on Earth, with the now traditional comic book-movie destruction of New York. Now that Marvel have the confidence of the audience, they’re ready to build a whole universe with Guardians of the Galaxy.

This is no easy feat.  It took five movies to build up to the Avengers, and despite a little bit of foreshadowing in Thor:The Dark World and The Avengers, this is the least connected Marvel movie so far. By it’s very nature, it has to stand alone, and incredibly director James Gunn succeeds in this gargantuan task.

The first act is an exercise in exposition, and there’s plenty of learn about the planet’s of Xandar, the Kree, Ronan the Accuser and even Thanos. Remarkably Gunn keeps this grounded with an Earth-set pre-credits scene which introduces the audience to future Star-Lord Peter Quill and quickly manipulates us into an emotional investment. This is followed by a smart action set-piece that sets up protagonists, antagonists and the main plot-device and Gunn earns the right to info-dump until he can gather his band of anti-heroes together.

Chris Pratt does a stellar job leading the cast, and has real movie-star charisma and muscles to match. Zoe Saldana is just alien enough as assassin Gamora even if her character’s switch from the dark side is massively underwritten. Dave Bautista plays vengeful Drax with the right level of stoicism coupled with the ability to deliver a barbed one-liner. While they’re all great it’s the animated leads that steal the show; how far we’ve come from Jar Jar Binks.

Rocket Raccoon is a fully realised trash-talking genetically modified and cybernetically-enhanced mammal with outstanding voice work from Bradley Cooper and seamless computer animation. Groot is perhaps the most wonderful creation put to film this century and instantly iconic. When Christmas comes, then expect their to be a plethora of tree-based merchandise flying off the shelves. Vin Diesel gives the humanoid tree great personality with the three words “I am Groot” and the animators bring him to life with great beauty and expression.

James Gunn’s regular music collaborator Tyler Bates has created Marvel’s first truly memorable score which gives the perfect sense of wonder to this new area of the MCU. This is enhanced by the 70s soundtrack which plays from Peter Quill’s Walkman and adds an air of familiarity to these strange new worlds.

It isn’t a perfect film by any stretch. The orb is another infinity stone just like we’ve seen in other Marvel movies. This is part of the Marvel format but there’s nothing new or imaginative done to separate this plot-device from either the Teseract or the Aether. It’s just a big powerful weapon.  In addition, the Guardians team itself all seem to bond together a little too quickly going from suspicious of each other to family in record time. They could all have done with being locked in prison a little longer and bonding in a Breakfast Club style.

The villains aren’t really anything more than shouty sci-fi cliches. Ronan the Accuser is more destructive than accusatory  and wants to destroy a planet for reasons; he doesn’t even accuse if of anything. Karen Gillan’s Nebula isn’t given a great deal to do when there was certainly scope to further develop the sisterly relationship with Gamora. Ultimate big-bad Thanos is only really there as set-up for the future but that’s okay, it’s good to have multiple avenues to explore but seeing him as a big weird animated king sitting on an asteroid doesn’t really make him appear that powerful or scary. The less you see, the more threatening a bad guy feels, but perhaps that ship had already sailed with his appearance in the Avengers.

Thanos looks like a hokey piece of comic book science-fiction because that’s exactly what he is. There are multiple elements of this film that wouldn’t feel out of place on something like Farscape and the make-up even feels reminiscent of total trash like Andromeda. The fact that mainstream audiences are willing to give these weird stories a chance, is testament to the power of Marvel. It truly is the era of the geek.

And so, with much fanfare, arrives the latest addition to Marvel’s increasingly inaccurately named Cinematic Universe.