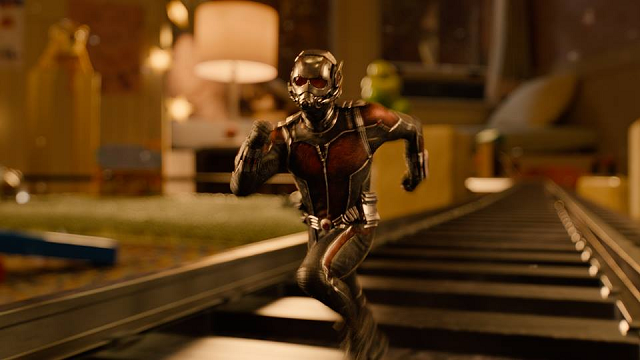 Ant-Man is pure comic book fluff, but it’s a fun and well-executed piece of fluff. It follows the Marvel formula almost to the letter, but somehow manages to feel somewhat refreshing thanks to a likeable cast and the new spins that the writing team bring to old tropes and the visual flair from director Peyton Reed.

Paul Rudd stars as Scott Lang, a criminal who specialises in breaking into top security facilities. Luckily he doesn’t do this for personal gain but rather acts like some kind of modern day Robin Hood, otherwise how on Earth could the audience identify with him? We meet him as he’s released from jail and looking to get back on the straight and narrow in order to win the respect of his ex-wife and young daughter, Cassie who exists purely to get kidnapped at the climax of the film so that we have some kind of emotional connection and a reason to dislike the paint by the numbers villain.

But they’re not the only father and daughter with issues – there’s like a theme going on. Scott is approached by Hank Pym, super genius and inventor of the Pym Particle, which allows people to shrink and grow. He was once the superhero Ant-Man and thinks in Scott, he has found a successor. That causes tension with his daughter, Hope (Evangeline Lilly) who thinks she should put on the shrinking suit and talk to ants, because she’s good at that. But there’s a complicated family history involving the death of her mother.

Anyway, team Ant-Man have to work together to stop Pym’s former protege Darren Cross, who has developed his own version of the Pym particle and plans to use it for very bad things. And so a heist ensues with lots of shrinking and growing.

First off, the special effects are outstanding, from an opening sequence set in the 1980s which provides us with the most convincing use of digital ageing and youthing ever seen. The main event is the macro photography used when Scott shrinks down to the size of an ant. It’s stunning, convincing and most of all it adds a unique visual style to the film. It may even made the 3-D sequences worth some extra cash, if that’s what turns you on.

Fun is pretty much the name of the game here. It has seemed that the most recent Marvel films (we’re looking at you Avengers: Age of Ultron) have become bogged down with the weight of franchise building, but by contrast this is pure and stripped down origin story and the perfect palate cleanser following the slightly darker tone of recent outings.

While overall, there is a mood of levity, it never feels like an out and out comedy, even with a script written by Adam McKay and Paul Rudd. Rudd is actually fairly restrained and plays up his every man likeability, just like he’s been doing since Clueless. Michael Douglas is always good value, although the father/daughter relationship is somewhat clunky, but serves the narrative purpose. Evangeline Lilly isn’t really given a fun part. Her character wants to be the hero and has the superior skills and abilities but is stopped by the men in her life so she spends much of the time scowling. Hopefully by the time of the sequel and with the character development in this film, Marvel will actually have realised the potential of female superheroes. On a similar note, Judy Greer is wasted as Lang’s ex-wife. It’s a shame to employ such a talented actress only to use her to look concerned some of the time.

As a villain, Corey Stoll’s Darren Cross certainly has enough charisma but is given very little to do. His character arc almost feels like he is ticking the boxes on his journey to be a villain. Does he have a past with Pym? Yes! Former protege you say? That’s right! Is he actually just an evil version of Ant-Man? Why yes he is – it’s just like in Iron Man, the Incredible Hulk and Captain America. If it ain’t broke don’t fix it.

In the end though, even with Marvel’s underwires  showing through it’s well worn bra, the  film feels remarkably perky on its own merits. Following billionaires, experiments and geniuses, Scott Lang is the first every man hero in the Marvel universe and that is more than welcome. Also, it’s the first time we get to see the passing of the mantle with a second generation hero. If the Marvel Universe isn’t getting reset any time soon, there might be a few stories along these lines and the studio has now proved it can be easily pulled off, and it even leaves you wishing you could see Pym is his 1980s prime. The heist elements are set up and paid off beautifully and at a pretty short run time, Ant-Man never outstays its welcome.

The film is Marvel’s most standalone (Earth-based) film in some time and the in-universe references are fun, if sometimes unnecessary. Overall, while it may be formulaic, stripping the formula back to its basic form shows exactly why it works. Marvel, with director Peyton Reed and a talented writing team, have done it again. Now when’s Civil War coming out?

The Marvel Universe continues to expand with Ant-Man, starring Paul Rudd as Scott Lang, a small time crook who is given the chance to become a tiny superhero.