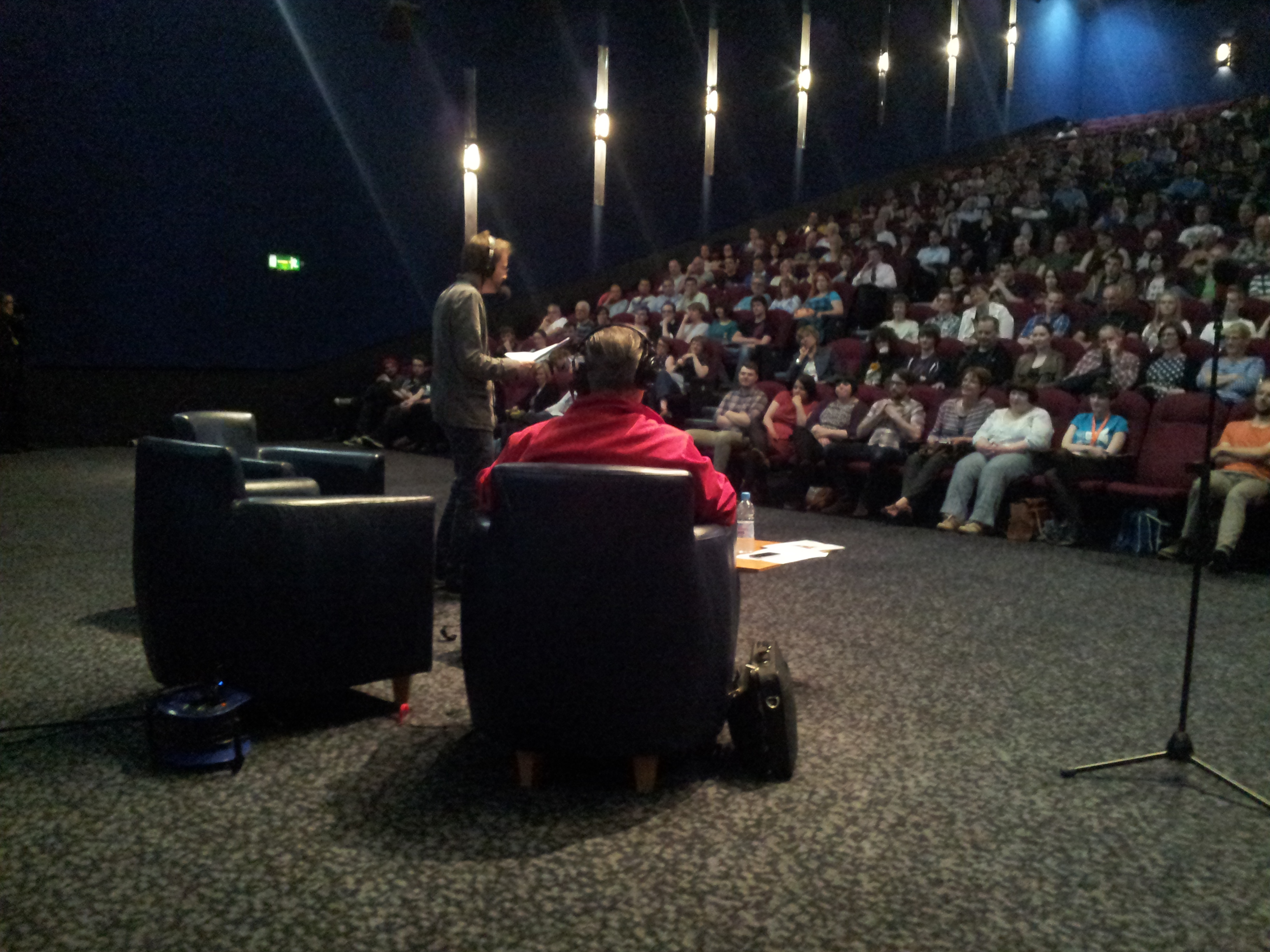 Is it perverse to review a film review show? Probably, but this isn’t just any film review show – this is Mark Kermode and Simon Mayo’s Film Review on BBC radio Five Live – or Wittertainment as it’s known to its fans. Some might say that this show has a cult following but that would be doing it a great disservice. Through its podcast the show has a massive global following, and not necessarily because people love film, but because as a double act, Mayo and Kermode (Simon’s preferred order) are a wonderfully entertaining combination.

The pair first worked together as young trendy people on Radio One in the 1990s before maturing careers took them on many exciting broadcasting assignments. Simon became host on weekday afternoons on Radio Five Live in 2001 and on Friday afternoons he was joined by the good Doctor Kermode for a brief film review segment. It became a podcast in 2005 and according to legend (or wikipeida) was downloaded an incredible 42 times. It has become a little more popular since.

After it was announced that Simon Mayo was departing from Five Live to take on drive time on Radio Two, many feared the end of Wittertainment. Instead this Sony Award Winning show was given a new and expanded two hour regular slot on Fridays on Five Live and a new production company, Somethin’ Else, enhanced the show’s online presence significantly with an active Facebook page (much better than the Test Match Special page) and YouTube channel.

An established and passionate fan base has allowed the show to expand and on occasion do some outside broadcasts at significant film events. When there was an opportunity to see two of my favourite broadcasters live at the Edinburgh International Film Festival, I applied immediately and was lucky enough to get tickets in the draw to be in the audience at Cineworld screen 7 at Fountain Park, Edinburgh.

The atmosphere was remarkably relaxed. A large queue was efficiently ushered into the large cinema, with three chairs and headsets and a small coffee table out front and to the side a control desk with what seemed like an incredibly minimal set-up for a national broadcast.

With around 10 minutes to go, the presenter and contributor arrived on stage and donned headsets. Simon gave the most laid back fire safety announcement and told crowd that in the event of a fire an announcement would be made while Mark mocked him slightly. He also said that there was to be no swearing following an incident in the previous week’s following Joss Whedon’s singular use of a swearword, it seemed to open the floodgates of filth in the podcast for these ordinarily perfect broadcasters.

A short intro with added Edinburgh cheers was recorded for the podcast, before it was announced that they would be taking contributors from the audience to give brief opinions on the UK Box Office top 10. I wasn’t really intending on putting up my hand as Simon started reading the list of films, but when he said Fast & Furious 6 at number six, my arm was raised. I looked around and I was the only one. Simon summoned me to come down to the stage and mocked my shiny mock leather jacket as I looked like someone from the eighties. Finally somebody understood the look I was going for. Sorry, the look for which I was going.

A producer took my name and wrote it down next to Fast & Furious 6 on a list for Simon and lined us up against the screen wall in the right order. I few feet in front of us was a microphone where I would go and try and be articulate on national radio and in front of a live audience. From here I also noticed the cameras pointing at us and our hosts were being projected onto the big screen for the benefit of the crowd, as we would be when we took the stand.

Mark turned around and told us to make sure we were pithy in our reviews, so no pressure at all then. Before the box office top 10, there was a brief interview with Ken Hay, CEO of the Festival. I’m sure it was a great interview with some concise questions from Simon and Mark with some wonderful answers from Ken but I wasn’t really listening. I was too busy trying to come up with erudite things to say about Fast & Furious 6, a subject that really lends itself to erudition.

The interview completed, it was the turn of the general public to get involved. Those in front of me stepped forward and made their points about their chosen films. It was an audience full of film fans and they all seemed to know what they were talking about. Simon thanked the person in front of me, I stepped up towards the mic, and then he handed off for the travel update from his colleagues in Salford. That was fine, I wanted to be standing two feet in front of the mic for a few minutes. As always, I had styled it out and managed to retain my cool.

The travel bulletin over, Simon welcomed the audience back and reintroduced the top 10. I stepped up. Mark gave his brief review summary, stating how absurdly long the runway was in the final set piece. Then I was asked what I thought. Words came out, I think that they were quite good ones. I didn’t talk for too long and I even made a point about gender equality. Well its better to listen.

An argument with Mark Kermode; win! I am now up there with Joe Cornish in terms of cool. I returned to my seat feeling pretty good and ready to enjoy the rest of the show.

There followed an interview with Glasgow born actor Robert Carlyle who is taking part in a Q&A at the festival. In a very entertaining interview he talked about his career including a potential return to the part of Begby in a Trainspotting sequel, his forthcoming directorial debut, the increasingly quality of television and his current work as Rumpelstiltskin on Once Upon A Time. No mention of his outstanding work on Stargate Universe though, but that would just be to satisfy my inner fan boy. It ended with a hug for Simon as he had admitted being afriad of Carlyle in some of his hard man roles. His delightful real life personality, just highlights what a great actor he is.

Simon Mayo is a masterful interviewer. If anyone wants to learn how to conduct an interview then you should listen to him. He is forever well researched, asks well thought out questions and creates a space where guests are relaxed and able to talk. When an interview is done right, you shouldn’t really notice the interviewer and Simon Mayo is a master of the art as well as being a consummate professional and a genial host. If I ever grow up, I’d like to be him.

Later in the show there was another interview with tennis legend and rights activist Billie Jean King, there to promote The Battle of the Sexes, a film about her match against former men’s champion Bobby Riggs who even at age 55 claimed he could beat any woman in the world. There are certain people that have a presence and listening to Billie Jean King talking, you could understand what made her a champion. She is extremely intelligent, forward thinking, believes in the improvement through each generation and has fought to win her whole life, not just at tennis, but at bettering the human race. If the documentary captures even half of her charisma then it’s definitely worth a watch and of course it has endorsement of Mark Kermode, just as his haircut got an endorsement from the Queen of Tennis, much to his delight.

Dr Kermode provided reviews throughout, although fewer than usual due to the extra time devoted to guests, audience interaction and some horse racing. Both sides of the cinema were given a horse to support by racing correspondent Cornelius Lysaght to cheer every time they were mentioned causing audio confusion and amusement to Mr Mayo in particular.

The show featured reviews of World War Z, Like Someone in Love and Before Midnight. There is little point in repeating what he said as those reviews are available for your listening pleasure, however watching the man work is something to behold and his reputation for flappy hands is well deserved as massive exaggerated gestures are often used as he emphasises his points. That’s all because he has so much to say. Mark Kermode is a powerhouse, his brain is a  storage facility filled with two centuries worth of film knowledge and an expansive vocabulary in which to perfectly articulate the thoughts that the rest of us so often have but are unable to express. His verbal essays always give the source material the respect they deserve and put the works into a fitting context.

However there is always the chance that he might move into territory beyond what we mere mortals can comprehend and that’s where the greatness of this double act can be found. Simon acts as a representation of us, asking the right questions, tempering the eccentricities at times and framing the cine-literate ramblings in a way the everyone can understand and enjoy. They really are the perfect combination, creating a show which remains entertaining, even if you know nothing about films.

The banter may occasionally be sparky but it’s underpinned by a great mutual respect and a love of what they are doing. That’s why people come from miles around to fill a large cinema to watch two men talking, and that’s why it’s the BBC’s flagship film programme. It was a real privilege to watch them work.

Peter Capaldi is the Doctor

We review the opening film of the Edinburgh International Film Festival