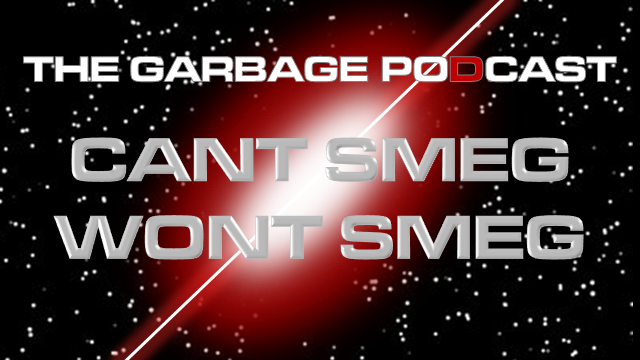 With more details of the recordings of the two new series of Red Dwarf seemingly imminent, it seems like as good a time as any for a new edition of The Garbage Podcast. So, we should look at one of the high points of the show to celebrate the excitement we are all feeling, right? Right?

Well no, frankly that’d be effort, so instead this edition of the podcast has our commentary for Can’t Smeg Won’t Smeg. But as much as we joke about it, was it really that bad, or was it a quite enjoyable centrepiece to what is still the biggest celebration of the show on TV, Red Dwarf Night. I don’t know. Why are you asking me? We just recorded half an hour of commentary that (mostly) discussed that topic, so listen to that and I’ll get back to eating cereal in my underwear.

What was the thinking behind the show? Was the rice manoeuvre pre-planned? And is Ansley Harriott truly an oily God as the Change.com campaign would have you believe? These kitchen lubricated topics and more are discussed as Alex, James and Andrew look at an look at an unusual oddity.