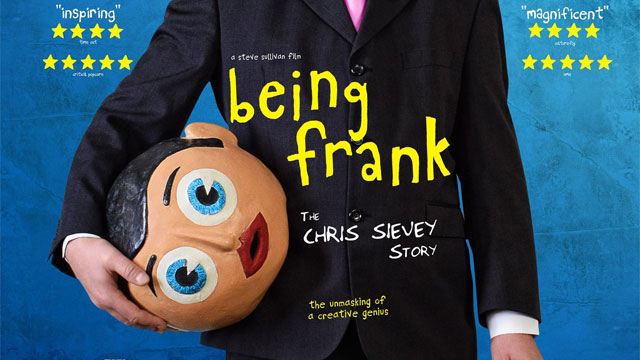 When I moved back to Manchester a few years back, one of the first things I did was make a six-mile pilgrimage to the suburb of Timperley.  There, on a street corner in the centre of town, posed incongruously outside a Costa, stands a large bronze statue with an even more incongruous giant head greets passers-by with a cheery thumbs up.

It’s an unexpected tribute to Frank Sidebottom, the cult character initially created by Manchester artist and musician Chris Sievey as a warm-up act for his own ‘proper’ musical efforts.

Frank somehow ended up becoming a pop culture icon, opened for Bros in front of 50,000 bemused kids at Wembley… and would be a source of career frustration for the man behind the oversized papier-mâché mask.

Almost a decade after his sudden passing from cancer aged just 54, the story of Sievey’s life is being told by the documentary Being Frank, which is released this week in cinemas and on download.

The long-awaited, initially crowdfunded film, does an excellent job of digging into the story of a quirky pop musician from Manchester who found fame — if not fortune — with a creation he sometimes grew to resent, and from whose shadow he would struggle to emerge as a performer in his own right.

Thankfully, despite the delays, the finished product is an excellent piece of work, serving as both exposé and tribute to the colourful, troubled performer and his most famous creation.

For many people, particularly internationally, any knowledge of Frank at all probably comes from the 2014 film of the same name which very loosely (if we’re being generous) adapted Jon Ronson’s book about his time working with Sievey as part of Frank Sidebottom’s Oh Blimey Big Band.

On these shores he’s better remembered, especially among folk of a certain age, from his TV appearances in the 80s and 90s on shows such as Motormouth, or his barmy late night Fantastic Shed Show, lurking on the periphery of British pop culture for nearly three decades, cameoing on screen and performing small, crazy gigs up and down the land.  But mainly around Greater Manchester.

One of my favourite Sidebottom outings came during the mid 2000s, when he landed a late night slot on Manchester’s much-missed, barely watched hyperlocal Channel M.  With Manc celebrity guests and a ridiculous gimmick (the first transmission of each episode was in black and white), they were brilliant post-pub weirdness.

Sievey also produced brilliant test cards for the channel featuring Frank and sidekick Little Frank talking to themselves, singing and generally larking about.

If you caught them you never forgot them, but they seem, now, the perfect encapsulation of his story.  Brilliantly creative, massively self-indulgent, yet designed to be seen by as small and as intoxicated a crowd as possible.

Despite Frank’s popularity, Sievey faced a pauper’s funeral after his death — until Ronson sparked an online fundraising campaign which ended up paying for a deserved send-off, and the Timperley statue.

Being Frank doesn’t sugarcoat the very human failings of Sievey.  His ex-wife talks about his inability to make money, or spend it properly.  His problems with alcohol and drugs, and other bad behaviours, are discussed openly, but not dwelled upon.  His frustrations at not finding the success he wanted are clear, as is his creativity.

Director Steve Sullivan interviews a huge array of people, from Sievey’s ex-wife and family to the likes of Mark Radcliffe and John Cooper Clarke, who knew and performed alongside him.  Illustrating this is an amazing array of clips Sievey’s own VHS and audio archive, which at times seems almost Monkhousian in its depth.

Everything from radio appearances of the Freshies to health-and-safety defying kids TV outings — including an surprising ad for an estate agent and the pilot for a stop motion animated Frank series, has been excavated.

Incidentally, that archive now resides within Manchester Library, which is currently curating a selection of items as part of the Bobbins exhibition celebrating Frank – including one of the original heads used by Sievey when performing as Sidebottom, and the many bodies of Little Frank (and the headless body of Little Denise, a story amusingly told in the film)

What also comes across from Sullivan’s documentary is a man heartbreakingly always in the wrong place, at the wrong time.  The Freshies’ brush with frame is scuppered by industrial action on Top of the Pops and an IP lawyer for Virgin.

His single Camouflage was way ahead of the curve — a likeable pop song that came with a B-side of a self-programmed video designed to be loaded and synced up to the song on a ZX81, it was released just before home computing hit its 80s boom. The documentary illustrates it perfectly with a magnificent clip of Nick Owen going full Partridge while interviewing a frustrated Chris on TV-am.

The creativity and constant reinvention of Chris and Frank, almost to the point of self-sabotage, stops Sievey being the star he wanted to be, and arguably deserved to be, and his own frustration is apparent in the documentary, as it is with the bandmates he worked with along the way.

Sullivan does a great job in capturing the great affection and infuriation in seemingly equal measure from those who knew Sievey outside of the Frank persona.  He also showcases just how talented a performer Sievey was in his own right — while capturing just how important Frank ended up being in his life.

The thing which perhaps sums him up best is also my favourite part of the documentary — a story about a mysterious ‘code’ Sievey claimed to have placed around the edge of the drawings, stories and cartoons he produced over the years.  I won’t spoil it, but the payoff to it — which involves GCHQ codebreakers, Sievey’s archive and an amazing punchline — deserves to be seen.

Being Frank: The Chris Sievey Story is released in cinemas on March 29.  Bobbins: Frank Sidebottom and Chris Sievey is free at Manchester Library until April 30.