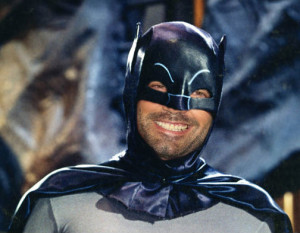 The Internet let out a deafening exasperated sigh when it was announced that the actor chosen to be filling the latex boots of the Batman in the next Man of Steel movie was none other than actor/director Ben Affleck. I’ve read comments ranging from “I’m done with this franchise!” to “Here’s another example why Marvel is better than DC!” Superheroes are near and dear to our hearts and there is nothing that sends an average geek to rant online more than adaptations of their favorite properties. But this geek is here to tell you that Ben Affleck heading to Gotham City is not such a bad thing. Here are ten reasons why I’m giving him a chance.

1. Bruce Wayne’s cocky playboy persona Why do the citizens of Gotham not suspect that the rich beefcake with a very active health insurance policy is probably the only one that can afford all those wonderful toys? Bruce Wayne is a narcissistic jerk that is in the tabloids all the time. Affleck can bring a lot of life experience to this secret identity with how much trouble he used to get into under the flashbulbs. but also, think of some of Affleck’s past roles as Shannon Hamilton in Mallrats, Jim Young in Boiler Room or Fred O’Bannion in Dazed and Confused. The man can play a total ass if he needs to.

2. Physical features Ben Affleck has the good looks of a rich playboy, but he has done many movies that require him to be believable as an action hero. Think of Armageddon, Reindeer Games, The Sum of All Fears and especially Daredevil. Whether you liked those movies or not, you cannot deny that he played the role well at least physically. He was such an action hero in the late 90s to early 2000s that his buddy Kevin Smith parodied him in Jay and Silent Bob Strike Back with his Moonraper billboard. Ben Affleck is a 6’4 guy with a strong jawline and that can go a long way to being a worthy enough physical presence to wear the cowl.

3. Age Zack Snyder has teased that there will be shades of Frank Miller’s Dark Knight Returns and that he would be casting an older Batman. Obviously, this isn’t going to be an adaptation of that work because you would need an older Superman, too. But Affleck is eleven years older than our current Superman Henry Cavill. Affleck’s Batman can almost be like a mentor to this young overpowered superhero. Affleck’s age has given him the air of maturity that he would not been able to pull off ten years ago.

4. A New Batman Bringing the Fun When it was announced that Batman was going to be in Man of Steel 2, actor wishlists started appearing on many pop culture websites. People like Michael Fassbender, Ryan Gosling, Richard Armitage and Josh Brolin were considered the best choices for the caped crusader. But why does Batman have to be played by super-serious actors? Haven’t we already done that with the Christopher Nolan films? We need a different Batman. Don’t forget, this is a superhero movie. I’m not looking for Zack Snyder to “Schumacher it up”, but people are treating this like it’s a passing of the torch to a new Batman franchise and not a sequel to Man of Steel. One thing that critics missed in Man of Steel was the fun of Superman movies. Maybe Ben Affleck’s proven charisma can help with that.

5. Remember when you were wrong before? There have been other casting choices that were thought to be completely off the mark and initially balked at. The first that comes to mind is Michael Keaton. I remember when casting was announced for Tim Burton’s new Batman, some thought the roles should have been reversed. Michael Keaton, a comedic actor would be more suited for the Joker than the dark and brooding Caped Crusader. Speaking of Joker, think of how many geeks flipped out when Heath Ledger was cast in The Dark Knight. Then more recently than that, and even more notable, what about Chris Evans? Many superhero fans thought that the cheesy young actor who played the arrogant hothead Human Torch in the Fantastic Four movies had no business trying to pull off the all-American heroics of Captain America. I think it worked out pretty well.

6. “He should stick to directing!” Affleck has won back many hearts by directing three great movies – Gone Baby Gone, The Town and Argo. But I don’t think he’s actually as bad an actor as people say. He’s been great in his own movies, but I’d like to cite some of his other roles, too. I believe, before he was a Hollywood star, Kevin Smith really put Affleck’s potential as a leading man on display in Chasing Amy. His friendship with Matt Damon really helped make Good Will Hunting a great personal dramatic piece. And he brought a great deal of depth and empathy as George Reeves in Hollywoodland. I have always bought Ben Affleck as an actor. Sure, he’s been in crappy movies and been pretty insufferable. But it hasn’t turned me off from seeing movies that feature him altogether.

7. He was Daredevil!  Take another look at Ben Affleck in Daredevil, especially the director’s cut. That movie gets referenced often when people talk about bad superhero films. There are many problems, but Ben Affleck shouldn’t have to shoulder the blame for all of it. Unfortunately, Affleck’s public profile as one part of tabloid obsession “Bennifer” soured the world against him. His and Jennifer Lopez’s face and every waking moment were on all the magazines. People were just sick of him and, quite frankly in my opinion, looking for another reason to rail against him. When this flawed superhero movie came out, it added fuel to the fire. But what was truly wrong with Daredevil was not his acting, but the production itself. It was a not very solid script and it wasn’t true to the character of Daredevil. It kept trying to be a hipper version of Batman. It tried to double down on its heroes and villains and sell us that a broke lawyer had a lair that might as well have been financed by Wayne Enterprises. It’s terribly dated, too, with really subpar CGI and a nu-metal laden soundtrack. But I believe Affleck as Daredevil in the action scenes and I think he does a worthy performance as Matt Murdock. And the first sparks of his relationship with Jennifer Garner are all on screen. I liked his friendship with Foggy too. Daredevil could have been great if it was a bit more reeled in, and gotten more love if Affleck wasn’t so overexposed in real life.

8. This is a brave move. Think about all the outrage that poured out since the announcement. Ben Affleck hasn’t been this high-profile in about ten years. He hasn’t been in a huge paycheck role since, well, Paycheck. The early 2000s were not kind to the man who recieved Golden Raspberry Awards for Worst Actor in Daredevil, Gigli, and the aforementioned hilariously-named Paycheck as well as being nominated for his work in Surviving Christmas and Jersey Girl. Here we are, ten years later, and he has truly distinguished himself again. He has proven himself as a filmmaker. He and Jennifer Garner try to keep their family life out of the spotlight. He is involved in activism and philanthropy. It’s been a steady climb since the dark days of Bennifer, but now he has an Oscar again. His last Oscar, for co-writing Good Will Hunting with Matt Damon, gave him enough clout to start breaking into the blockbusters and subsequently fizzling out within a five year span. Here we are again, another Oscar in his hand, and he has just taken a huge role that will either make him or break him. It’s not like he needs the money either. He’s also starring in David Fincher’s Gone Girl, based on the widely successful novel by Gillian Flynn, as well as directing Live By Night, based on a novel by Gone Baby Gone author Dennis Lehane. Those both sound like home runs to me. Ben Affleck has nothing to prove and a lot of appeal to lose. It’s pretty gutsy.

9. You wouldn’t have been happy with any choice.  TV Guide’s Damian Holbrook posted this today on his Facebook account and I totally agree. With all the choices being bandied about, there was no consensus on who would be the best person to play Batman. The biggest outcry that I’ve read was leftover from the Christopher Nolan films. Some people actually wanted to see Joseph Gordon-Levitt in the Tumbler after the end of Dark Knight Rises. This would not have worked for me because, come on, Bruce Wayne is Batman. There can be other Batmans, but the one that is on the Justice League needs to be Bruce Wayne’s Batman. JGL’s Batman belongs on the Teen Titans.

Are you ready to kneel before Zod?

First trailer for The Man from UNCLE