December 17th 2015 is going to be a day long remembered. Unless you are Fred Hill – the parent of two from Philadelphia who was ‘outraged’ at seeing the Princess Leia gold bikini figure at his local Target store – you will know that that is the date that Star Wars: The Force Awakens is released to the world after what seems like years and years of anticipation and excitement.

It has been over 10 years since a new Star Wars movie was released in theatres, the last of the prequel trilogy, Revenge of the Sith. It’s fair to say that the prequel trilogy has its fair share of detractors, the most famous of these is probably Simon Pegg. He has gone on record many times, stating his displeasure with Episodes I-III. He was recently said during a TV interview for Mission Impossible: Rogue Nation that there hasn’t been a ‘decent Star Wars movie in 33 years’.

Firstly, his arithmetic isn’t great. If he is indeed counting Return of the Jedi as the last decent Star Wars movie, that is in fact 32 years old. Secondly, in my opinion, he is wrong. I am a fan of the entire Star Wars saga, and have been since I saw The Empire Strikes Back in 1980. There are things about the prequel trilogy that I don’t like, but instead of writing about those, I’m going to list 10 things about the prequel trilogy that I love. Warning: there are some bad Star Wars puns included. 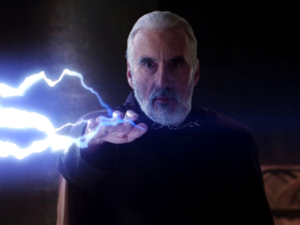 Played with a regal magnificence by the late Sir Christopher Lee, Count Dooku is a very charming fellow who just happens to a fallen Jedi that has turned to the Dark Side of the Force. First seen in ‘Attack of the Clones’ Dooku is the leader of the Separatists that are wishing to break away from the Republic, ultimately leading to the Clone Wars. Of course, his part in this scheme is entirely manipulated by Darth Sidious (more on him later) and he is just a pawn in Sidious’s master plan, but his character feels so much more than that. Lee plays Dooku as if he was an old fashioned gentleman, brimming with confidence and charisma. He teaches Obi-Wan and Anakin a lesson in lightsaber combat on their first meeting, injuring Obi-Wan and chopping off Anakin’s arm. His duel with Yoda was a first for Star Wars, as it was the first time we saw Yoda use his lightsaber in combat. His appearance in ‘Revenge of the Sith’ was brief, but very memorable as his death was another step down the dark path that would forever dominate Anakin Skywalker’s destiny. 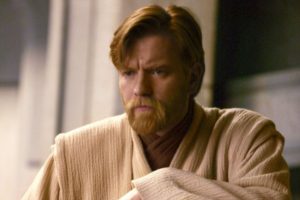 Obi-Wan’s character arc through the prequel trilogy is often overlooked, but I love how you trace his growth from Padawan learner to Jedi Master over the course of the films. His character in The Phantom Menace could be interpreted as annoying with quotes such as “Don’t tell me we’ve picked up another pathetic life form” & “But Master Yoda told me to be mindful about the future!” but I believe that it was George Lucas’ intent to show Obi-Wan as a Padawan that had much to learn and take his character on a journey to Jedi Master in Revenge of the Sith. The difference in him in between Episode I and III is really well executed and Ewan McGregor’s performance in Revenge of the Sith is particularly good. You get a sense that he truly is one with the Force and is a confident and capable Jedi Master. 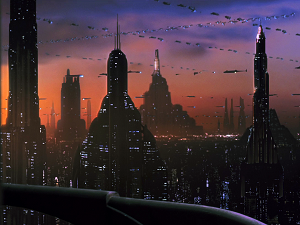 Whilst writing Return of the Jedi George Lucas & Lawrence Kasdan came up with the idea of an ‘Imperial Planet’ but it was shelved. Timothy Zahn resurrected the idea when writing the first novel of the Thrawn trilogy ‘Heir to the Empire’ and chose the name Coruscant. Lucas was then convinced to use the name when he wrote The Phantom Menace. The first time movie goers saw Coruscant was at the end of Return of the Jedi in 1997 as a very brief scene was added for the Special Edition. When I saw the special effects work that ILM did to bring Coruscant to life for Episode I, I was blown away. The idea of a huge city like planet is massive and it looks incredible on screen. Obviously heavily influenced by Blade Runner (especially in Episode II) Coruscant is almost as much of a character than anyone else in the prequel trilogy.

7. The Rescue of Palpatine from General Grievous 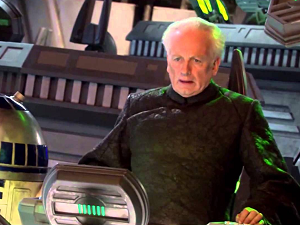 The first 30 minutes of Revenge of the Sith are as much fun as anything else you may find in the Star Wars saga. Chancellor Palpatine (Ian McDiarmid) has been ‘kidnapped’ by General Grievous and it’s up to Obi-Wan and Anakin to save him. There is so much to enjoy in this sequence, from the journey through the space battle raging over Coruscant, the final confrontation with Count Dooku and the first face-off with Grievous. The chemistry between Anakin & Obi-Wan is really well done and makes you realise what they’re going to lose by the films end. There is a real sense of fun throughout (apart from the death of Dooku I suppose) and it ends on a great line from Obi-Wan, “Another happy landing” 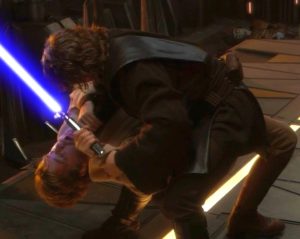 Quite possibly the best lightsaber fight in the saga to date (we’ll have to wait until December before we see Finn vs Kylo Ren) the climax to Revenge of the Sith has some fabulous action with the battle between Anakin and Obi-Wan on the lava planet of Mustafar. The fight is brilliantly choreographed and quite brutal. Some of the special effects may look a little dodgy now but the fight (with Yoda vs Emperor Palpatine running in parallel) has a real tinge of tragedy. John Williams’ score is amazing as ever (more on that later) and the sight of Anakin burning to a crisp on the lava bank doesn’t hold back, it’s graphic. The Immolation scene was the reason why Episode III earned a 12A certificate. 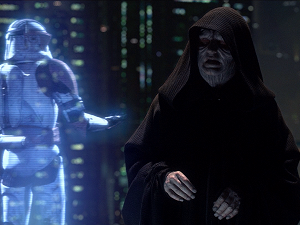 At this stage in the article you may be thinking “you may as well call it the 10 best things about Revenge of the Sith”. Trust me, there are things from the other prequels in the top 5. The top 5 begins with the Order 66 sequence of Episode III. Anakin has chosen to join the Sith and turn to the Dark Side of the force. It is time for Palpatine to unleash ‘Order 66’, the long gestating plan and secret order implanted into every member of the Republic’s clone army. The order is given and Jedi all over the galaxy are murdered in cold blood by their clone trooper protectors. There are some wonderful visuals in this sequence and it is truly sad to see the demise of the Jedi. It’s a shame that the sequence ends with some truly awful pantomime acting from a youngling. I think that kid came straight from a school nativity play, I can almost hear him saying “Joseph and Mary wanted a room for the night….” Sorry, I went off on a tangent there. 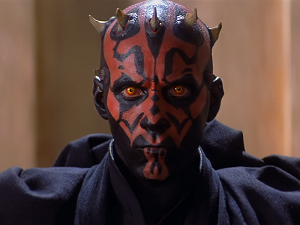 Cast your mind back 16 years and think about the marketing campaign for The Phantom Menace. Darth Maul’s red and black visage seemed to be absolutely everywhere! It was on posters, cans of soft drink, cuddly toys, his and hers matching watches and pretty much any other piece of merchandising you can think of. The image of Maul is primal. Back in 1999 he was mysterious and his double ended lightsaber blew my mind when I first saw it. I couldn’t wait to see him in the movie. Unfortunately, he was criminally underused in Episode I but whenever he was on screen the movie improved tenfold. His three-way fight with Qui-Gon and Obi-Wan is superb and Ray Park’s agility brought so much to the role. It’s a shame that he meets his maker at the end of the movie, I would have loved to see him continue in Episode II, but that would have meant we didn’t get the wonderful Christopher Lee as Count Dooku. The character’s popularity never died and he was resurrected for the Clone Wars animated series. You can’t keep a good Sith lord down, even if he hasn’t got any legs. 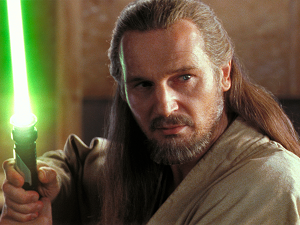 Say what you like about The Phantom Menace (and most of the internet already has) but I love Liam Neeson as Qui-Gon Jinn. Neeson does have to deal with some awful exposition during his performance (damn those Midichlorians!) but he handles it very well and he gives a great, stoic performance. I really liked the idea of a maverick Jedi Knight, one that doesn’t fully abide by the rules and defies the stuffy, old fashioned Jedi Council. Ultimately he is responsible for two things, one good (The training of Obi-Wan) and one very, very bad (it’s basically his fault for unleashing Darth Vader onto the galaxy). He couldn’t really survive Episode I, Lucas was busy setting up the remaining prequels and Anakin had to be Obi-Wan’s Padawan by the movie’s end but I really wish he could have stuck around longer. I would have loved to see him in Episode III in ghost form consulting with Yoda but it wasn’t to be. 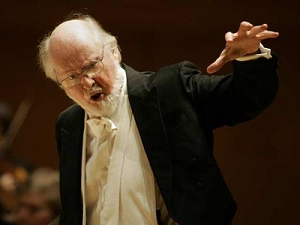 George Lucas has said that he sees the Star Wars movies as silent movies and in a way he is correct. If you remove the dialogue (personally I’d love to remove “Hold me like you did on Naboo, when we had nothing but our love”) John Williams magnificent score tells the story. His music informs the viewer of what is going on. Take the music away from Star Wars and it lessens the impact of the films so much. Williams wonderful work continued with the prequel trilogy. Whilst creating new themes for the movies (‘Duel of the Fates’ is one the best pieces of Star Wars music ever) whilst weaving in existing themes from the classic trilogy, the music really helps to bind the two trilogies together. My recommended tracks from the scores are:

If you are fan of the scores for Star Wars, I would strongly recommend that you check the podcast ‘Star Wars Oxygen’ from Rebel Force Radio. There are monthly episodes that dissect the soundtracks and they made me appreciate them even more. You can find them here. 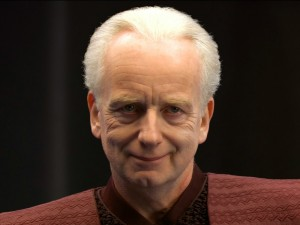 Without a doubt the star of the Prequel Trilogy is Ian McDiarmid as Chancellor Palpatine/Darth Sidious/The Emperor. He is the evil puppet master behind the entire saga, his pure evil makes Darth Vader look like Cliff Richard. Darth Sidious’s master plan to take over the Republic, destroy the Jedi and form the Galactic Empire is genius. Sidious is patient, manipulative and just downright bloody evil! MacDiarmid’s performance is wonderful, you can see he is truly relishing the role, especially in ‘Revenge of the Sith’. The scene at the Opera on Coruscant where he is telling Anakin the ‘legend’ of Darth Plagueis is brilliantly acted. He is manipulating and seducing Anakin to a tee. His glee when he finally reveals himself to the Jedi is palpable (no pun intended). His ‘UNLIMMMMATED POOOOOOWWWWWER’ line is a bit hammy but I can forgive that. Mr McDiarmid, I salute you.

The teaser trailer for Star Wars: The Force Awakens is here

A long time ago, in a galaxy far far away…

Things have been happening this week. We bring you them in the form of Geeky Links.