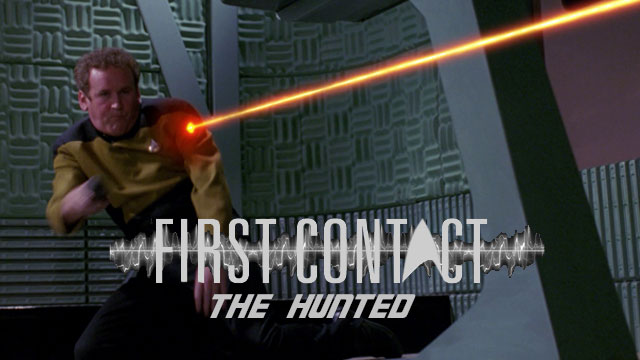 The Enterprise is conducting a really thorough investigation into whether a planet  can join the Federation. “Well the Prime Minister seems trustworthy, despite the moustache” remarked Riker to Picard as they walked around the obvious set.  Unfortunately an incident occurs and a dangerous prisoner escapes which is embarrassing for everyone. Since this planet isn’t so advanced, The Enterprise says they’ll catch the rogue but he’s a crafty dude and evades capture. When he is caught, he beats up the terrible Enterprise security team before Riker sits on him. He’s a super soldier, abandoned on a penal colony after the government no longer needed him for combat. Following some chat, it’s decided this planet needs to sort out its issues before they can get a new flag.

Andrew, James and Alex talk aimlessly about an episode that they don’t even remember anymore in this exciting instalment of First Contact.

Listen to the previous episode ‘The Defector’ here

In a metaphor for the BBC in the 1970s one of the senior crew starts using the radio to start talking to an inappropriately young girl, and forms a special bond.

The Enterprise is on course to deliver some supplies to a remote outpost who are spying on a proto-vulcan settlement. Everything goes wrong though.